Keep Your New Year’s Resolution and Train for the Zombie Apocalypse With RunKeeper 3.0 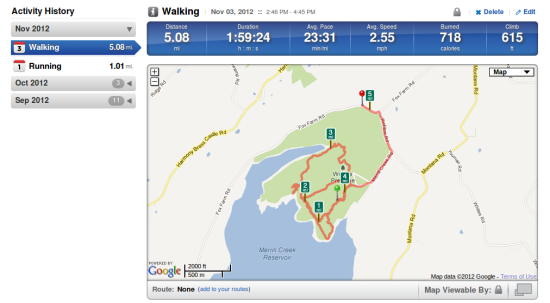 With the new year hours away, a lot of us are realizing how gross and out of shape we are after weeks of holiday eating. We’re also realizing just how easy it would be for zombies to get us when the inevitable outbreak occurs. Whether you just want to work off some extra holiday weight, or want to stay in fighting shape to keep the shambling undead from munching on your brains, RunKeeper just released new version 3.0 to track your fitness progress and help you meet your goals. Cardio is rule #1 in Zombieland for a reason, people.

RunKeeper has been around for a while. It was one of the first 200 apps in the iTunes store, and it’s popular among serious runners, and even bloggers who jog in Batman T-shirts while listening to The Dark Knight Rises soundtrack like it. It uses the GPS built into most smartphones to track a runner’s route, distance, speed, and even changes in elevation. The app even gives the runner customizable alerts for intervals of time, distance or both.

One thing RunKeeper is really trying to push with their new 3.0 update is the social integration features of the app. They’ve been part of the app for a while, but with 3.0 RunKeeper hopes to make it easier for runners to share their progress, and even photos from their workout with friends over Facebook and Twitter.

Some people might not want to share their workout routine with friends online, but it can be a nice way for people to encourage you to stick to a goal. Or, if your friends are like mine, it’s a good way for them to publicly shame you for not keeping to a schedule, or completing a run slower than last time. Your experiences may vary.

RunKeeper 3.0 sports a completely redesigned interface, which is good, because as great as the functionality of earlier versions was, navigating the menus was always a little clunky, and everything was either some shade of blue or gray. Another new feature is live activity tracking, where users can let friends track their progress while they’re exercising instead of posting a summary afterwards. That’s only available with the premium RunKeeper Elite version, which is available for $4.99/month or $19.99/year.

The 3.0 version is already available for iPhone users, and RunKeeper says the Android release will happen soon. They’ve even released a “making of” video to outline the new features, and to show a lot of people running.