Running Marathons Can Be Bad For Your Health | The Mary Sue

Called It: Too Much Running Is Bad For Your Health 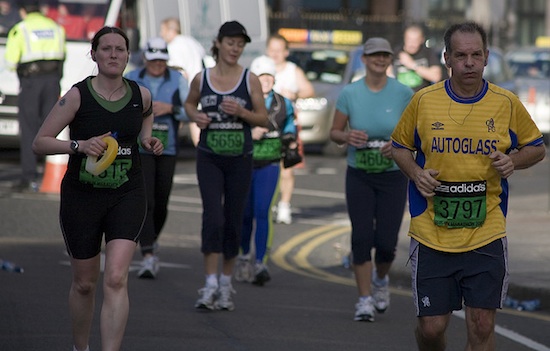 Running makes for great exercise and keeps your heart healthy, but overdoing it by running more than an hour per day, or running multiple marathons, can actually shorten your life, according to a recent editorial in the journal Heart. As someone who feels that running is a very good thing to do if you are being chased — by a mob of villagers with pitchforks, for example, or an angry bear — and a very silly thing to do pretty much any other time, I’m going to abstain from the customary victory lap and just sit back feeling pretty vindicated right now.

Taking running to the extreme probably won’t make you less healthy than people who don’t get enough exercise, say the authors. After all, running is darned good for you, even if it does suck and make everything awful pretty much every time we try and make ourselves do it. Extreme training regimens, though, may tax the cardiovascular system unnecessarily and wipe out any benefit you got from the moderate exercise that most doctors recommend — an utterly reasonable suggestion that we avoid like the plague, of course. According to the editorial:

even though chronic extreme exercise may not kill you, it may erase many of the health advantages of regular moderate exercise.

Yet another reminder that most things  — like a glass of heart healthy red wine — are good in moderation, and that even good ideas taken to their most extreme generally end up making you look pretty silly, and also just covered in sweat and praying for anything, anything to just make the running stop. We’ll also point out that some of us have had reason to question the health benefits of running ever since the death of Jim Fixx, a running guru who dropped dead of a heart attack while — yup, you guessed it — running. We’ll let one of our favorite comics take it from here, as he most assuredly tells this one better.