You Can Kickstart a Project to Bring Cyborg Cockroaches Into Your Home!

And you can even send away for a kit to make your own remote-controlled cockroach! 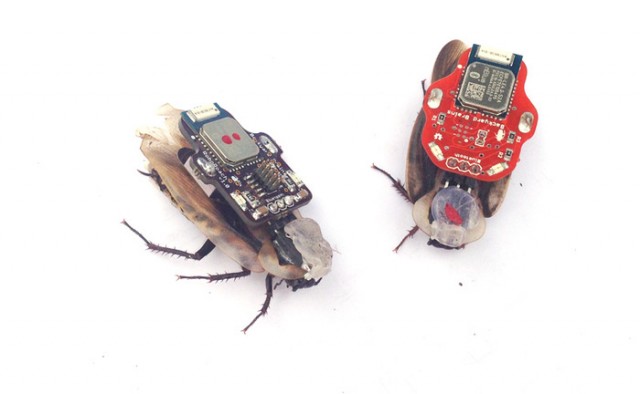 We’ve reported here before about electronically enhanced insects that researchers can control with the push of a button. Now, the folks at Backyard Brains want to bring that creep-inducing tech into your home with RoboRoach, a do-it-yourself kit that will let anyone turn a simple everyday cockroach into a terrifying remote-controlled cyborg bug.

Let’s face it — growing up, who among us didn’t harbor little kid dreams of being a mad scientist one day, building giant lasers and robot armies that would leave those peasants back at the academy cowering before your might? OK, just me then? I can live with that. But if “conquering your enemies with mind-control implants” is still on your childhood wish list, the RoboRoach project could make all your youthful dreams come true — just as long as you’ve got a couple bucks to spare and all your enemies are cockroaches.

The RoboRoach project from Backyard Brains lets you control a roach from your smartphone, steering it left and right by sending signals to wires implanted in the insect’s antenna. Once the stuff of graduate level labs, the new kit — which is a little over a third of the way to it’s $10,000 goal — will include cockroach ansthetic, wires, a receiver backpack, to strap to the roach, and the software you’ll need to bend the hideous little creature to your whim. In short, it’s everything you need to build a cyber roach except the roach, and they’ll send you details on where you can order one of those, too.

Tell you what — we’ll just let the folks from Backyard Brains show you the project in action in this video:

RoboRoach is more than just an interesting gadget that lets you steer a cockroach, though. The ultimate goal of Bakyard Brains is to put simple brain stimulation technology into the hands of youngsters in an effort to introduce to to neurotechnology sooner — like My First Chemistry set, but for mind control. While we’re all for introducing children to neuroscience at a young age, though, we have to ask — is “mind control” really the way we want to do that? That seems like a recipe for a new generation of super villains.