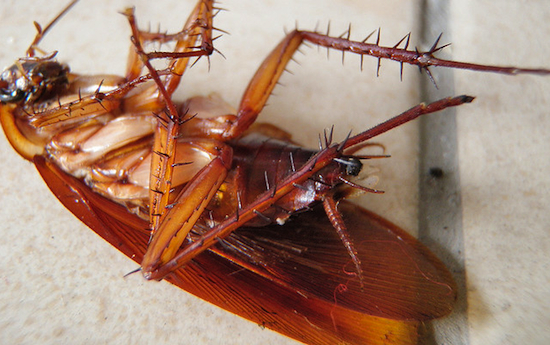 Due to their nauseating inclination for scurrying through all manner of foul refuse and dining on rancid food and carrion, cockroaches are walking incubators of disease, their exoskeletons nearly bursting with a multitude of harmful microbes. Despite this, many animals see the lowly roach as a tasty source of food, regardless of the fact that eating one is pretty much tantamount to licking the pole on a subway train. However, not all of Earth’s creatures are content to chow down on these disease-carrying morsels without taking proper measures to ensure they won’t be walking away with a wicked case of food poisoning. Scientists in Germany — the land of chocolate and now, apparently, a mecca for roach studies — have discovered that the larva of emerald cockroach wasps go above and beyond to disinfect their roach dinners from the inside out, and we mean that quite literally.

Not at all disparate from other parasitic wasps of its ilk, the emerald cockroach wasp starts life within the body of an unfortunate insect host which, as its name implies, is the American roach. Sounding like it came straight out of a horror movie plot a board of tiny insect film executives would come up with, the female emerald cockroach wasp stings an unsuspecting roach and drags it back to its burrow, wherein the mother slaps one of its eggs on the paralyzed roach’s back. Once the wasp egg hatches, the nightmare begins in earnest as the larva bores its way through, devouring the roach’s insides for sustenance — while its host is still alive.

But before the bouncing baby emerald cockroach wasp can begin its gruesome feast, the little guy has plenty of work to do. Namely, giving its new surroundings a thorough cleaning. A member of the study’s research team, Gudrun Herzner of Germany’s University of Regensburg, had miniature viewing windows placed on the sides of the roach — because, apparently, it wasn’t suffering quite enough and needed a dash bit of humiliation, too — to watch the larva’s behavior from within. Herzner and her colleagues noticed that the larva constantly secreted a clear liquid from its mouth, soaking the roach’s internal tissues with what they discovered to be a potent disinfecting agent.

Analyzing this natural disinfectant, the researchers found mellein and micromolide, two substances known for stymieing the growth of lethal microbes such as Serratia marcescens — a bacteria common in roaches that could prove fatal to healthy, growing wasp larva.

After learning about the emerald roach wasp’s method of cleaning house, it really makes us wonder if the chestbursters from the Alien series of films do the same thing before exiting their human hosts, because we swear we saw one holding a bottle of Lysol spray and a handful of paper towels.

(via Nature, image via xcode)