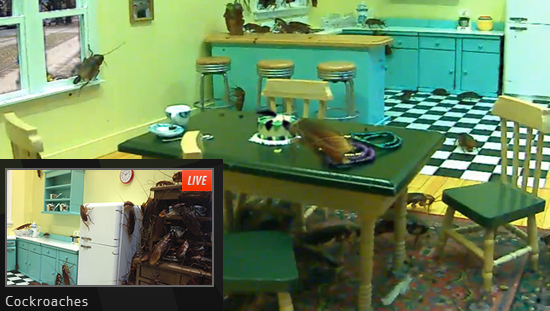 Are you an Orthoptera enthusiast? Have you got an itch that only constant footage of roaches can scratch? Well, Animal Planet’s got you covered with their new Cockroach Cam, which delivers all the twitchy, chitinous streaming action you could ever want, 24/7. They’ve even placed the roaches in a tiny little kitchen, making them seem oversized. How charming!

Animal Planet knows — I daresay counts on — the fact that people like to watch animals. The more adorable, the better, but it’s not just the cute ones they’re got in store with their new Animal Planet L!VE venture, “your online home for the most interesting live animal cameras.” Hence the roaches.

Fortunately, they’ve got some other 24/7 cams to to choose from.

There we go. That's the Internet we know.

They’re calling it “ambient entertainment,” like those old fish tank screensavers we used to have, but better because it’s not just a program or footage on a loop. You can watch these cams on the  website, or possibly elsewhere. Animal Planet has already worked up a deal with Samsung to get these cams on their smart TVs, and soon Roku and Xbox Live will be able to stream them.

Simply watching animals does something to us. Particularly cute ones, which experts say hits the pleasure centers of our brains like a dopamine switch, as if they were sugar or drugs. I’m not so sure about the roaches, but at least Animal Planet L!VE’s website also aims to educate. For example, now I know that cockroaches are known to eat hair. Thanks, Animal Planet!

Still, it’s not like these are the first animal cams ever done  — The New York Times‘s has a hawk cam — but Animal Planet is one of the first big companies to go all out with them. Most live animal cams are run by nonprofit groups or amateurs. Some of the cams picked up by Animal Planet belong to Explore.org. Their media adviser, Jason Damata, said that their cams are especially popular during the day, particularly lunch time when people are at work. For now, their cams don’t have advertising — which some of Animal Planet L!VE’s cams do.

Yes, some of these streams are punctuated by the occasional abrasive commercial, which partially ruins the pleasure of watching. No, I’m not interested in seeing Tanked, Animal Planet. I really just want to watch these puppies play, thank you.

Although my wife will be disappointed that there isn’t a red panda cam yet. Then again, if there were, she’d probably never get anything done.