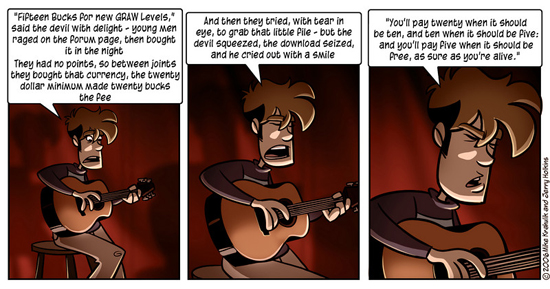 Penny Arcade has been in operation for a relatively long time. The webcomic has existed in one form or another since 1998, which means it’s nearly halfway through its second decade. If Penny Arcade were a single entity, they’d be a teenager. Being around that long also means they’ve accrued an impressive backlog. Every so often, a denizen of the Internet stumbles across one of their older strips and makes it relevant again. For example, a redditor that goes by the name shmallowfish recently found one of PA’s comics from 2006 and made it into a pretty catchy tune.

Here’s the song itself, hosted via SoundCloud:

The ditty, with words from the Penny Arcade strip, is Bastion‘s “The Pantheon (Ain’t Gonna Catch You)” and shmallowfish actually performs it as one of the characters from the game. It pretty much doesn’t get better than that.