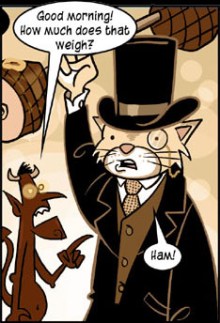 So far, 2012 seems to be the year of launching new video game sites that established editors of other sites leave to found. Vox Media kicked off the trend when a group of recognizable gaming writers went to found the Vox Media video games vertical, and now, with the help of Ben Kuchera, formerly of Ars Techncia, the team over at Penny Arcade will be expanding their empire to more traditional video games coverage.

In his goodbye letter over on Ars Technica, Kuchera couldn’t use kinder words to describe his time — and the staff — over at Ars, while detailing his reason for leaving the site for the Penny Arcade venture. If you’ve been paying attention when prominent writers leave their current position to found another venture, the reasons Kuchera gives for leaving Ars are fairly similar: Respect for the site launching the new thing, and a chance to mold and shape something in their own vision.

Over on Penny Arcade’s announcement post, Jerry Holkins (the Tycho half of the Penny Arcade duo), claims that they’re launching the coverage because “news is pretty much busted at the moment,” attributing this to the quick consumption cycle the Internet requires. Holkins sums it up, “deadlines every twenty minutes puts you on the wrong side quality versus quantity.” Holkins goes on to say that the Penny Arcade team has a track record of attempt to fix things they view as broken, and this new gaming angle is their attempt at that regarding games journalism.

If you notice, the phrase “new site” is not used, and Kuchera states that the team is still figuring out where to put the new coverage, whether that means a completely separate site, or within the main Penny Arcade news feed. For now, it looks as if the plan is for Kuchera to fly solo, with his coverage appearing in conjunction with the usual Monday, Wednesday, and Friday Penny Arcade posts. In a QA on the Penny Arcade forums, Kuchera states the new games coverage is a few weeks away from launching, so stay tuned, and check out the QA to satiate any curiosity you may have, or to put to bed (or wake!) any fears regarding Penny Arcade’s expansion.