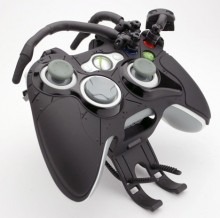 The Internet allows people to post their grievances with just about anyone to an audience so earth-shatteringly wide that no matter the subject, even if it is something absurd that one would assume no one would agree with, people will agree with and take up arms in your Internet name. The Internet can be used the other way around as well, as a great tool for public relations. What happens when someone in public relations loses his cool at some poor customer who was only trying to find out the shipping date of a long-overdue Avenger controller? Why, the Internet becomes captivated, of course! The story is certainly helped by the fact that Mike Krahulik, otherwise known as Gabe of Penny Arcade was involved and posted the entire email corresponded chain to his website. The ridiculously absurd story, recounted after the break.

Customer Dave ordered a couple Avenger Controllers for Christmas, which obviously, he preferred to arrive in time to be put underneath the tree. He ordered the controllers within an appropriate timeframe in which they should’ve been delivered in time for the holidays. When he saw they weren’t even shipped out as the Christmas date neared, he sent an amiable email to the company, on December 16:

I ordered 2 of the upcoming PS3 controllers (invoice xxxxxxxxx—Nov 3, 2011). Any chance of getting an update of when these items will ship? I’m not really happy about being forced to pay upfront then have the advertised date of “Early December” be completely missed without any sort of update on availability. I really need one of them for a X-mas present as well. Anyways, looking forward to finally using one of these bad boys. Thanks and happy holidays.

To which he got a reply from Ocean Marketing PR guy, Paul Christofolo that simply read, “Dec 17.” Obviously, this was confusing, so Dave asked for clarification, if that was the date the controllers were being shipped. Paul replied with a seemingly amiable, though poorly structured answer:

Dave asked for further clarification once again, and Paul replied with a little more information this time that no, the estimated date of Christmas delivery would not be met. Then, December 26, Dave noticed that new orders for the controllers would receive a $10 discount, and since he hadn’t received his controllers yet, he wondered if the deal would apply to him, and if not, why he wouldn’t just cancel his orders since they didn’t arrive yet anyone, and place new orders to get the discount, which is where things took a turn for the worse. PR Paul replied:

Things happen in manufacturing if your unhappy you have 7 days from the day your item ships for a refund. You placed a pre order just like any software title the gets a date moved due to the tweaks and bugs not being worked out and GameStop or any other place holds your cash and im sure you don’t complain to activision or epic games so put on your big boy hat and wait it out like everyone else. The benefit is a token of our appreaciation for everyone no one is special including you or any first time buyer . Feel free to cancel we need the units were back ordered 11,000 units so your 2 will be gone fast. Maybe I’ll put them on eBay for 150.00 myself. Have a good day Dan.

Yes, most people tend not to care about grammar and spelling on the Internet, but this email is from a pubic relations department. Yes, the customer’s name is Dave, not Dan. Dave obviously became frustrated, and included Penny Arcade, Kotaku, and a few other outlets into the email chain. Sending out the following email:

Then cancel my order if you want to.  I’m making a legitimate complaint about your poor communication and you’re the one stooping to childish levels, a patronizing attitude, and threats.  Hell you can’t even get the spelling of my name right.

And Gamespot pre-orders…wow what a terrible comparison.  Retailers take a couple dollars IF THAT for you to guarantee your game availability on the release date, whatever that is. That’s the understanding and that’s what you get.  Plus, I don’t have to complain to Activision or Epic games about these issues because they’re usually not missing the street dates for their AAA titles.

The above responded was followed by a long, detailed list of generally good points, all of which can be read over on Penny Arcade. PR Paul responded with an equally long email, name-dropping recognizable video game outlets, such as Kotaku, IGN, and Engadget, and includes such gems as:

Son Im 38 I wwebsite as on the internet when you were a sperm in your daddys balls and before it was the internet, thanks for the welcome to message wurd up.

See you at CES , E3 , Pax East ….? Oh wait you have to ask mom and pa dukes your not an industry professional and you have no money on snap you just got told.

The PAX comment grabbed Mike Krahulik’s attention, so he joined in on the email chain, letting Customer Dave know that if this PR Paul fella has a booth at PAX, Penny Arcade will cancel it. PR Paul replied:

We’re not renting a booth at pax east this year , bigger and better shows to be at we got nothing from the show . Oh so you know this guy has sold over 500 thousand dollars of product in Dec and is my main distribution arm landing us in GameStop , fry’s , Myers , Best buy , Activision , MLG , play N trade and a lot more . Were in 6 countries and you’re not going to take my money for a booth that’s a crock I can guarantee I’ll get a booth if I want one money buys a lot and connections go even further.  He’s a native Bostonian from Little Italy . Who are you again ?

Mike simply responds informing PR Paul who he is, and that he will never allow Paul to have a booth at his convention. Paul sent an amusing reply, full of name-drops, claiming that he knows everyone who “runs” Boston, which is where PAX East is located, and that his connections trump Penny Arcade’s ownership of the show, and also he doesn’t want to go to their show anyway:

OK Mike whatever you say lol , are you sure hour not in Boston I spoke to the person who ran the show in Boston last year. If you let some little kid influence you over a pre order then we don’t want to be a your show ,Ill be on the floor anyway so come find me , I’m born and raised in Boston I know the people who run the city inside and out watch the way you talk to people you never know who they know it’s a small industry and everyone knows everyone. Your acting like a douchbag not that it matters pax east pax west , e3 , CES , Gamer Con , SSXW ,Comic Con, Germany I’m all over the place. If we want to be there we will be there with industry badges or with a booth you think I can’t team up with turtle beach , Callibur or Koy Christmas , I can’t get Kevin Kelly to pull some strings or G4 , Paul Eibler Ex CEO of take 2 ,  Rich Larocco Konami , Cliff Blizinski Epic who were working with on a gears version , Activision who were working with on a MW3 and Spider man Bundle , The Convention Center Owners themselves , Mayor of Boston come on Bud you run a show that’s all you do and lease a center in Cities you have no pull in its all about who you know not what you do.

Mike I’m not trying to fight with you I’m really not , you should give me the benefit of the doubt before judging over one person’s bitching . Did I feed into his emails a little bit too much yeah ok . But it’s one person dude for real. No disrespect intended for you , My name is good in this industry and I know a lot of people. I’ll be at CES are you going ?

Mike then asks to be removed from the email list, and Paul immediately changes his tune back to obnoxious, claiming his team of 125 dedicated PR people will run a smear campaign on Penny Arcade. The chain ends here, with Mike leaving PR Paul’s contact info over on the Penny Arcade post. If you’re annoyed at Paul’s treatment of Customer Dave or Penny Arcade, have fun, the contact info is at the bottom.

Every now and then, you get people you can’t even believe act like they do. In PR Paul’s case, you can’t believe he handles himself the way he does, especially when considering he is in the position of public relations. It just goes to show that for every awesome customer support representative or helpful and genuinely nice retail employee you come into contact with, there’s some lunatic who not only doesn’t seem to deserve his or her position, but it is legitimately confusing as to how said person even got there in the first place.

Unfortunately for the Avenger controller, which actually seems to be a pretty cool device, not all publicity is good publicity, opposite of what Paul says to Penny Arcade in one of his emails. Also, it probably doesn’t help the Avenger that this whole public relations nightmare began because the controllers aren’t exactly shipping.

We apologize for our poor representation from Ocean Marketing. We wanted to give Paul a chance. He was rough around the edges, but he had drive and enthusiasm.

However his behavior was unprovoked, unnecessary, and unforgivable. We are no longer represented by Ocean Marketing.

Mike Krahulik also received an apology letter from PR Paul, which amusingly, began with apologizing for not knowing how big Penny Arcade is — not a sincere way to begin an apology:

I just wanted to apologize for the way our emails progressed I didn’t know how big your site was and I really didn’t believe you ran Pax , So for what’s its worth I am very sorry. Your post has obviously made my life very difficult and I have not slept yet dealing with all the spam and personal information intrusion as well as my family being smeared on the internet.

If you can please accept my apology and anything you can do to help if not me my son and wife please do. I have apologized to Dave and apologized to you what else can I do please tell me so I can make things good. I obviously care or I would not be emailing you.

As Mike puts it, it seems Paul is more sorry he got caught rather than simply sorry. At least N-Control did what was necessary to protect what is an otherwise cool controller.