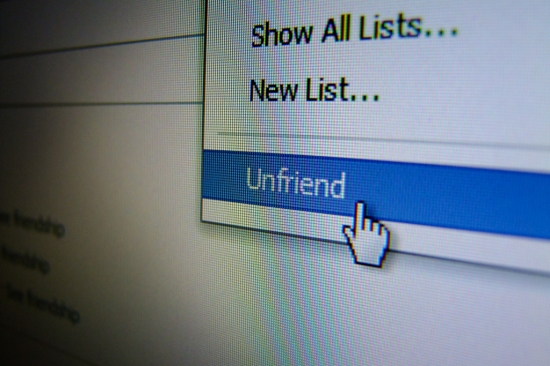 It may just seem like a small click in the virtual world, but did you know that unfriending someone on Facebook can impact your real world relationship with them as well? Yes. Of course you did. Everyone knows that. That didn’t stop researchers at the University of Colorado from proving it with a new study. Besides proving what we already know, the study also quantifies what percentage of people care about being unfriended, and gives some factors that affect how strongly your real life is impacted by an unfriending.

We’ve all done it. Sometimes you just get sick of reading the insane ramblings of someone you went to elementary school with, so you unfriend them. The University of Colorado study finds that of 582 people surveyed on Twitter, 40% would avoid real world contact with people who unfriended them on Facebook. It also showed that women are more likely to avoid contact with someone after being unfriended than men, but did not identify a reason.

They also found six factors that helped predict if a person would avoid contact with someone after being unfriended. These factors include: whether the unfriending was discussed after it happened, if there was an extreme emotional response, if a person believed their unfriending was related to offline behavior, how far away the former friends live from one another, whether or not the friends talked about their relationship before unfriending, and how much a person valued the friendship before getting dropped.

Christopher Sibona, the author of the study, also did research in 2010 about why people unfriend each other. He identified the four main reasons as posting too frequently, polarizing political or religion posts, sexist or racist posts, and boring posts. Sibona hopes his studies into how social media impact our real lives can help society come to grips with how to handle new elements of technology in our lives.

We also assume he’s doing to it figure out why someone unfriended him at some point in his life, but that’s purely speculation.

(via Phys.org, image via Oli Dunkley)