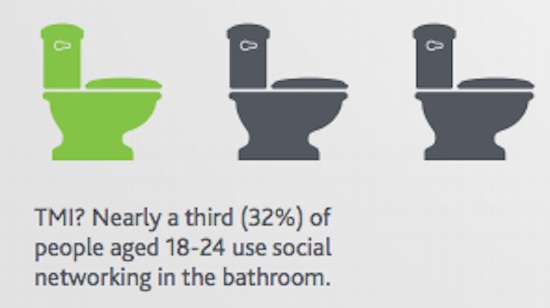 Between ads taking over your newsfeed, engagement announcements that leave you feeling even more single, and the yammerings of people you really should have unfriended back in high school, there are plenty of things to complain about in the social media environment these days. On the other hand, there’s an argument that we should all just be glad that we’re not seeing more updates about our friends’ bowel movements, because considering how many of us are tweeting from the toilet, it’s a mercy that verges on the miraculous. According to a report by Nielsen, one third of people between the ages of 18 and 24 use social networks while they are using the bathroom, a statistic which can also be read as “two thirds of people between the ages of 18 and 24 are totally lying to Nielsen.”

That statistic — which, really, seems low to us, because seriously, why even have a smartphone otherwise? —  is just one gem of information gleaned by Nielsen’s latest report on social media and how we use it. The study also found that people a little older — between 25 and 34 — were the most likely to use social networking sites at work instead of, y’know, working, with more than half of the respondents in that age bracket reporting that they used social networking services on the clock. No word, however, on how many of those people are Facebooking from the bathrooms at their office. Our guess? Kind of a lot. Like, at least more than you’re comfortable with.

Before we let you go, this seems like a good time to ask — have you like us on Facebook and followed us on Twitter yet? If not, we’d love to have you, whether you’re on the toilet right now or not. There’s no judgment here.