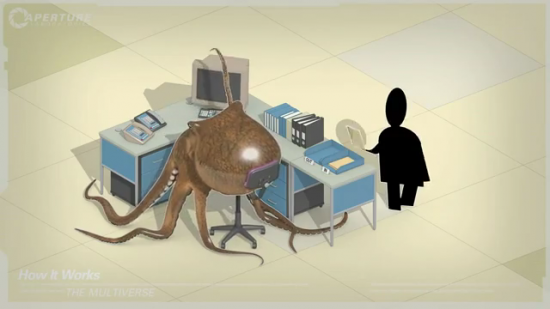 If you needed something fun to do tonight or for the next decade (or more) until Portal 3 releases, the Portal 2 Perpetual Testing Initiative DLC is now available. In non-hilarious, real-life non-Portal terms, that’s the game’s level creator. It’s free, and if that doesn’t tickle your seemingly untickleable fancy, the DLC contains new Cave Johnson dialogue, and he was your favorite part of Portal 2. Don’t deny it. Since you rightly love him so much, check out his hilarious letter to all of you regarding the level creator below. He’s angry.

Here’s Cave Johnson’s letter to all of you.

TO: All Aperture employees
FROM: Cave Johnson

Cave Johnson here. Your boss. It’s come to my attention that some of you are concerned after receiving my all-staff memo yesterday (“You: Design Test Chambers or You’re Fired”). So to put your minds at ease, let me clarify: You are not mentally ill and you did read the memo just fine. It was real. You should be designing test chambers, right now and at all times, or by God I will fire you.

Having said that, let’s be honest: Some of you are incapable of designing a test chamber, whatever the motivation. You’re only getting marginally better results than a dog would. Worse, actually. A dog designing even a substandard test chamber’d be pretty damned impressive, let’s not kid ourselves.

But don’t worry, you’re not fired yet. It turns out there’s an even better job you can do instead of being fired: Getting launched into an infinite series of alternate Earths to evaluate all the test chambers your smarter coworkers are making.

Wait, it gets better: I’ll be right there with you. Every step of the way, whether the tests work or not, Cave’ll be by your side, facing whatever life-threatening dangers we might run into out there. And even better, I won’t actually physically be there. I’ll be here, talking into a microphone, from complete and total safety. That way the people who’ll be monitoring whether you’re still alive won’t have to split their focus worrying about me.

So there you have it. Everyone’s useful in the Perpetual Testing Initiative. Except Peter Jenkins, which brings me to the point of this memo: Pete, you’re fired.

Alright, that should wrap it up. Everybody except Pete get back to work when this sentence finishes… now.

Better get to work.