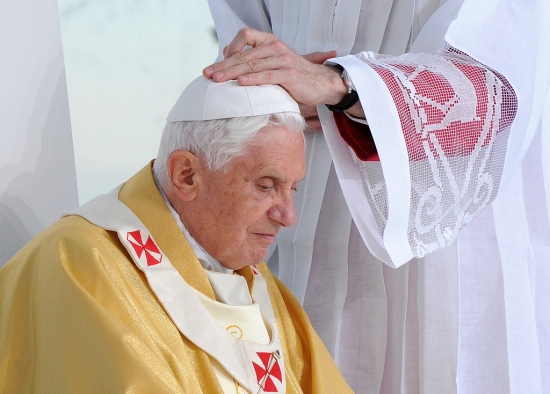 In a sign that maybe the Vatican doesn’t really understand this newfangled Twitter thing, they’ve announced that the Pope is beating Justin Bieber in the only category that counts: Retweets. If you’re wondering how that statement can be true, don’t bother, because it isn’t. Don’t worry, Pope, we’re sure you’re still beating Bieber in most giant hats. Probably.

Besides, the Pope’s 2.1 million followers are spread across the eight different accounts he uses for different languages, and so were the retweets. That seems like cheating considering Bieber has 31.7 million followers on one account. Also, if you’re trying to pick a fight over one of Bieber’s tweets, maybe don’t pick the one where he was honoring a six-year-old girl who died of cancer. I think that counts as cyberbullying.

While we’re talking about numbers that don’t matter, Pope, Bieber’s Klout score is 92 to your 82.

(via Yahoo! News, image via Catholic Church (England and Wales))