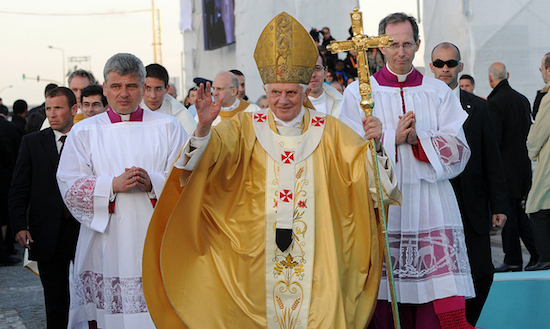 The entire Twitter community felt the holy vibes this morning when Pope Benedict XVI began tweeting in earnest on his once languid network profile. Within minutes, pious devotees, critics, and people who couldn’t pass up the opportunity to crack a topical joke swarmed His Holiness’ profile to communicate with Pope Benedict XVI directly. Tweeting under the moniker @Pontifex — which is Latin for “bridge builder,” but sounds more like the name of a dragon from Skyrim — the Pope is dishing out the blessings and words of wisdom in 140 characters or less, but based on his tweets, it looks like there’s a going to be a bit of a learning curve.

The Pope’s first message was tweeted early this morning — in numerous languages including Spanish and Arabic — and it seems he’s pleased as punch to speak with everybody about religious doctrine, relevant issues, and that awesome video of your cousin doing a sick backflip into the pool from the third floor window. He tweeted:

Dear friends, I am pleased to get in touch with you through Twitter. Thank you for your generous response. I bless all of you from my heart.

This tweet was followed shortly by two more that gave his followers the impression that the Pope hasn’t quite grasped the social component of social media. Here’s what led the Twitter community to this assumption:

How can we celebrate the Year of Faith better in our daily lives?

And he quickly answered the very philosophical question he posed with:

By speaking with Jesus in prayer, listening to what he tells you in the Gospel and looking for him in those in need

Despite this little flub, we should give the guy a break since it is his first real day on Twitter, and he’s entitled to make a mistake or two. Look, you’d be nervous too if you had over 800,000 followers and the big man upstairs to please. Down the line, others are expected to handle tweeting duties while some of the Cardinals teach the Pope how to compress verbose religious rhetoric on Bitly.

(via CNN, image via Catholic Church [England and Wales])