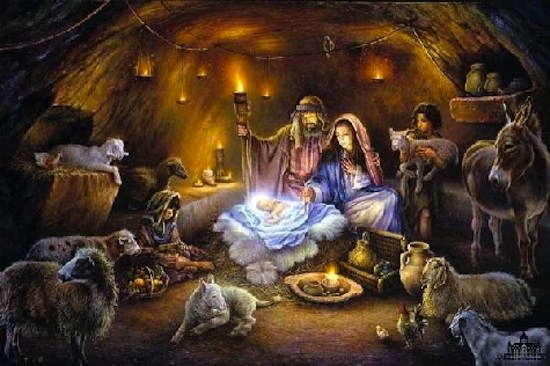 In what can be loosely termed breaking Bible history news, the Pope has stated that the long held nativity traditions of Jesus sharing his birth barn with donkeys and oxen are inaccurate, and also that the angels on hand to attend the birth of Christ did not sing. Which seems like kind of a bummer thing to say, really.  Then again, we assume that the Pope knows his stuff when it comes to the Bible. He is, after all, the Pope, and you don’t get that silly hat by not knowing what was happening when the son of God came onto the scene.

Benedict’s take on the newly lonely but significantly more hygienic birth of Christ is taken from his latest book on the life of Christ, but is not being issued as an official papal edict.  Presumably, that’s because not even the Pope is under the impression that he can get donkey statues out of nativity scenes worldwide, and that the tradition, however inaccurate, is likely to stick around.

Perhaps a more pressing issue than the maneuvering of donkey and ox statues in front yards everywhere, we now have no idea what the angels will be doing in the much loved Christmas carol “Hark The Herald Angels Sing” from now on. We think you’ll agree that our first blush recommendation (“Lo, the herald angels are just kind of hanging around/they are starting to creep us out a little”) doesn’t exactly have the same ring to it. If there are any songwriters in the audience, this is your cue to jump on in — Christmas needs you.