Pope’s Tweets Will Be Church Doctrine, #YOLO Could Be 11th Commandment [UPDATED] 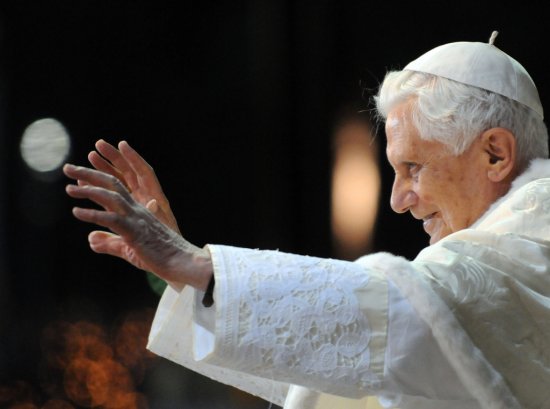 Remember when your parents signed up for Facebook? If you’re Catholic, the news that Pope Benedict XVI has signed up for Twitter probably feels pretty similar to that. The Pope signed up yesterday, but has yet to make his first tweet. He has to be careful though, because whatever the Pope says on Twitter becomes official church doctrine. If the Pope’s tweets are church doctrine, we assume anyone he retweets or favorites is officially declared a saint.

According to the Dogmatic Constitution of the Church of Christ, when the Pope speaks officially as the Pope, what he says becomes church doctrine. Even on Twitter:

…that the Roman Pontiff, when he speaks ex cathedra, that is, when carrying out the duty of the pastor and teacher of all Christians by his supreme apostolic authority he defines a doctrine of faith or morals to be held by the universal Church, through the divine assistance promised him in blessed Peter, operates with that infallibility with which the divine Redeemer wished that His church be instructed in defining doctrine on faith and morals; and so such definitions of the Roman Pontiff from himself, but not from the consensus of the Church, are unalterable.

Pope Benedict XVI hasn’t tweeted from his verified @pontifex account yet, although he did send a tweet using a Vatican account back in June to announce the launch of News.va:

Dear Friends, I just launched News.va Praised be our Lord Jesus Christ! With my prayers and blessings, Benedictus XVI

This proves that the Pope, like everyone on Twitter, is all about using it for self-promotion, and I guess that means self-promotion on Twitter is church law now. Be sure to follow us @Geekosystem!

The Pope is already up to 395,763 followers, and has been tweeted at by the likes of Israeli President Shimon Peres. Although the message politely welcomes the Pope to Twitter, Peres does not seem to be following the Pope’s account at this time. Interestingly though, he does follow the Curiosity rover and The Onion.

The only accounts the Pope is following are for various language versions of his own account, and the Vatican has said that he will not be following anyone else. Not even the Tweet of God? Seems like an obvious choice.

The Pope isn’t expected to make his first official tweet until December 12th, and will focus on mainly spiritual matters, but the 12th of December is also Frank Sinatra’s birthday, so we’re hoping the Pope starts off his Twitter career with a line from “My Way.”

UPDATE: According to the BBC the Vatican is now saying that the Pope’s tweets will not be considered infallible church doctrine. Reasons such as the tweets content being a summary of what the Pope actually says, and the tweets themselves being written by aides instead of the Pope himself mean that they are not subject to the rules of the Dogmatic Constitution of the Church of Christ as we earlier assumed.

(via Reuters, image via Catholic Church England and Wales)