Says Jackson: “I Have Never Met a Bigger Tolkien Geek in My Life.” 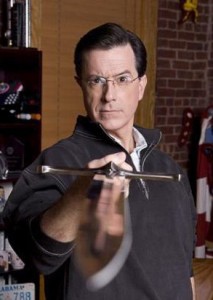 Philippa Boyens is our resident Tolkien expert, and when Stephen came down to visit the set, we put him head to head with Philippa on a Tolkien quiz – and Stephen triumphed. I have to say, his encyclopedic knowledge of Tolkien is spectacular, and points to a deprived childhood in some respects. — Peter Jackson, speaking of Stephen Colbert, who was recently invited to visit the set of The Hobbit films in New Zealand.

As for that rumored and possibly confirmed cameo for the fake news anchor, Jackson said that “it’s yet to be confirmed or denied.”