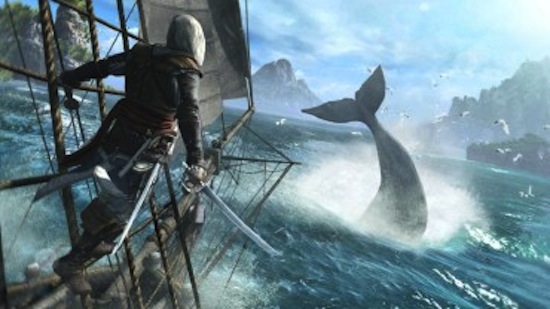 Well, PETA has invented a ludicrous thing to be outraged over, so it must be Wednesday. This week, it’s Ubisoft’s upcoming Assassin’s Creed IV that has the animal rights group all in a tizzy over portrayals of whaling in the game. Or rather, what might potentially be portrayals of whaling in the game, since the game isn’t out yet, and all we know about the game’s latest maritime installment is that at some point, the protagonist is on a ship and sees a whale. This, according to PETA, makes the game developers whale hating monsters who are worse than 1,000 Stalins, presumably because having any other reaction to it would require the folks at PETA to actually think about a reasoned response for like two minutes.

Keep in mind here that the above screenshot is the one and only thing we know about whales in the pirate-themed Assassin’s Creed IV: Black Flag, We might be able to hunt them, which, yes, is gross. We might be able to just watch them from boats and ponder the diversity and majesty of life. Whales could even be the secret villains of the series, pulling the strings of history from deep in their underwater dens. The jury is just out at this point. That’s not going to stop PETA from issuing a statement condemning the game, though:

Whaling—that is, shooting whales with harpoons and leaving them to struggle for an hour or more before they die or are hacked apart while they are still alive—may seem like something out of the history books, but this bloody industry still goes on today in the face of international condemnation, and it’s disgraceful for any game to glorify it. PETA encourages video game companies to create games that celebrate animals—not games that promote hurting and killing them.

If your argument is that whaling is a pretty despicable way to make a living, you won’t get a word of argument out of this reporter. Maybe wait until the game is released and all the facts are in, though, PETA? Flying off the handle when you see a whale in a video game — like losing your collective shit when the President swats a fly — makes it rather difficult to take you at all seriously. After all, if playing an FPS won’t make me shoot someone — and it really, really won’t — then it’s pretty unlikely that playing a whaler — which again, we’re not sure is a part of the game here — will turn me into Captain Ahab overnight.