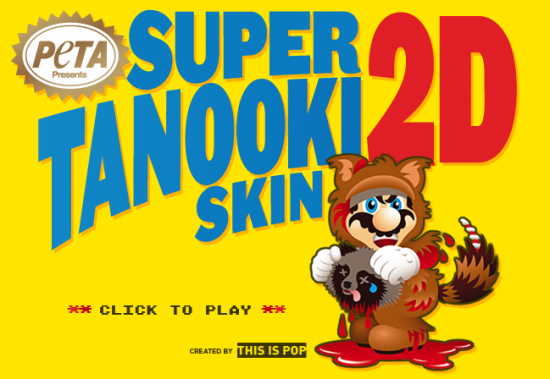 It looks like PETA is aiming their wrath cannon at video games once again, but instead of a relatively small developer like Team Meat, they’ve walked over the floating icon box, reloaded their cannon, and pressed the B trigger at Nintendo. PETA claims that when Mario puts on the Tanooki suit, rather than gaining the ability to turn into a statue, he gains the ability to support wearing fur. Like PETA did with Team Meat when they made Super Tofu Boy, they also made a game in response to the decades-old Tanooki suit, called Super Tanooki Skin 2D.

If one has been following PETA recently, one would pretty much know what to expect from Super Tanooki Skin 2D. The SEO of game’s home is simply titled “Mario Kills Tanooki,” so the game is obviously off to a great start.  The game features a skinned and bloody Tanooki chasing after a flying Mario, who is wearing the Tanooki suit, dripping with blood. That’s about it. The iconic Warp Pipes are also covered in blood, because PETA. 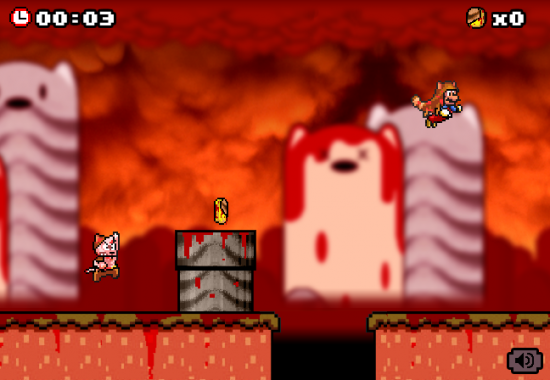 Nintendo made a statement to Eurogamer responding to PETA:

“Mario often takes the appearance of certain animals and objects in his games.

These have included a frog, a penguin, a balloon and even a metallic version of himself. These lighthearted and whimsical transformations give Mario different abilities and make his games fun to play.

The different forms that Mario takes make no statement beyond the games themselves.”

It sure is weird to say, but for once, Nintendo didn’t do anything wrong.