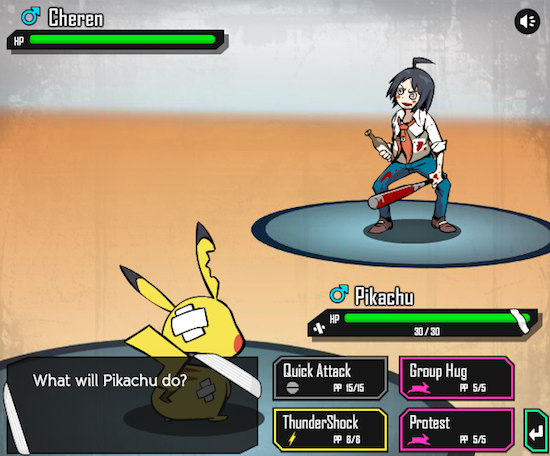 Pokémon Black and White 2, the next installments of your favorite pocket monster battle games, released yesterday, and with that, the oft misguided PETA released another of their video game satires. This time, it’s Pokémon Black & Blue, and even though PETA usually misses the point and regularly seems like they’d rather kill all humans than allow scientists to cure diseases using lab rats, this satire actually hits closer to the truth than some of their previous ones.

If you’re even slightly familiar with Pokémon, you’re aware that the series is eerily similar to dog or cock fighting, even though both the game series and anime teaches you to treat your Pokémon well, which is what Ash has to learn when he first obtains the ill-tempered Pikachu. Also, the designers intentionally made it so the Pokémon “faint” rather than die when defeated, even though it’d be pretty difficult to survive being shocked with lightning or blasted with dragon fire.

In PETA’s version of the game, which you can play here, you take control of liberated Pokémon, including Pikachu, Tepig, and Snivy. You battle demented trainers, rather than other Pokémon, some of which “faint,” others of which realize the error of their ways and release their captive Pokémon to your party. Each pocket monster has some of their signature attacks, then some PETA attacks, such as “group hug,” and “protest,” which seem to largely be debuffs.

When you win a battle, you’ll occasionally come across loot, from disturbing and depressing PETA videos, to wallpaper for your desktop. The game also makes some Mudkip jokes, because even PETA can’t avoid it. Also, be careful if you play through PETA’s Pokémon rebuttal, because it spoils the twist in the first Black and White.

Even though PETA is regularly misguided and takes their beliefs to an extreme, they’re actually more correct than usual this time around, as Pokémon is pretty much a game that promotes something very similar to dog fighting. Of course, if you play through the entirety of their satire, you’ll notice that they lose any good graces they might’ve built up by addressing one of the seedier and rarely discussed themes (Pokémon being dog fighting) in video games. Their extremist ideals run rampant throughout the game, and as usual, the message is very hypocritical — kill humans, save the animals. Though there are attacks like “protest” and “group hug,” the player still can’t win a battle without using violent attacks.

Still, though, rather than misunderstand that the character in Super Meat Boy isn’t actually made of animal meat, but rather is an inside-out boy, PETA picked a game series with a better theme to target this time around. Unfortunately, as seems to regularly be the case, PETA seems to have forgotten that violence against humans isn’t exactly an ideal solution to animal abuse either.