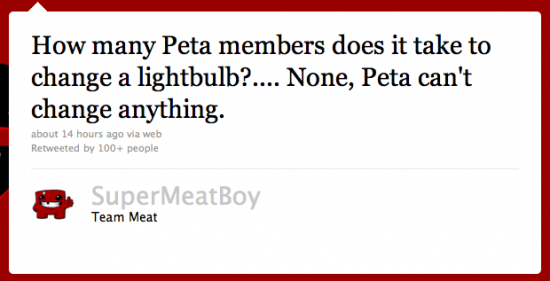 Team Meat, developers of the platformer Super Meat Boy, slung the above little diddy toward PETA earlier, after a somewhat toxic history between the two organizations, which included PETA making their own parody of Super Meat Boy, dubbed Super Tofu Boy, which casts Meat Boy as the villain instead of the hero.

As shown by Team Meat’s tweet, as well as the plot of Super Meat Boy (Meat Boy must save his girlfriend, Bandage Girl, from the evil Dr. Fetus), they obviously have a sense of humor, and they even went a step further and included Tofu Boy in their upcoming PC iteration of Super Meat Boy.

Team Meat also released a humorous little blog post to further explain their feelings on the whole situation, in which they thank PETA for “helping us turn Super Meat Boy into a house hold name and of course for making themselves look quite foolish in the process.”

(@SuperMeatBoy via The Daily What)