Inside the Fun Factory: An Elucidating Discussion with Pendleton Ward, the Creator of Adventure Time 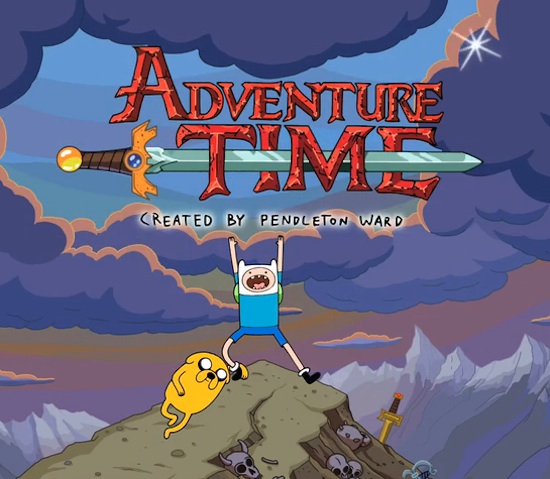 Pendleton Ward talks like you’d expect the creator of an anarchic frenetic, cartoon like Adventure Time with Finn and Jake to talk. His sentences often circle back on themselves, tinged with a West Coast laid-backness, which again seems quite commensurate with his job. But as cool and fun as his show is, it also has a big heart which was just as present when Ward spoke.

“Everyone is super talented,” he said, referring to his staff of artists and writers at Adventure Time. “And they’re all a bunch of brainiacs, super smart.” His graciousness is interesting, especially considering that his rise to prominence is thanks in part to the homemade Adventure Time pilot going viral online. But all cartoons are like children, and it takes a village to raise them. Perhaps that’s why (in a move that seems unusual for a creator) Ward has such kind words for his channel, Cartoon Network.

“They’re amazing in helping us because they let us write really cool ideas,” he said. “They’re really supportive, is what I am trying to say, of what we’re trying to do.”

What Ward and his team of brainiacs are trying to do is keep creating arguably the best cartoon on television today. A mix of high-fantasy adventure and comedy presented in a cutesy style reminiscent of Japanese toys or old Max Fleischer cartoons. But its core is Ward’s attempt to make something everyone will love, regardless of their age.

That’s a tall order, but Ward’s approach is straightforward. “I think we just write to make ourselves laugh,” he said. “We just write for ourselves. We try to crack each other up, that’s what we do. We don’t sit down and try to tailor jokes for kids or for adults. We just write stuff that we think is funny and hope everyone else thinks it’s funny.”

The approach seems to be paying off as the show enters its fifth season (Cartoon Network, Mondays at 7:30). Despite that long run, the series is only just now getting its first complete DVD collection, which goes on sale this Thursday, July 10. (And Mr. Ward has no idea why it has taken so long, thank you very much.)

Even though this collection is a long time coming, it has some special features that will keep fans happy. No, really. While most DVDs has snoozefest commentaries and questionable value-added content like ads for other movies, Adventure Time season 1 will include such delights as a behind the scenes featurette made by Ward and a behind-the-behind-the scenes featurette.

And that’s just the beginning. During the commentary for an animatic (sort of halfway between a storyboard and a finished cartoon), Ward interrupts the discussion by showing one of his student films that explores the origins of Mannish Man the Minotaur from the episode Enchiridion. Characteristically, Ward described it thusly: “I was like ‘I will put it. right. here!” And then it just cuts to the student film.”

There’s even a commentary track from Ward’s mother. “She just talks about how proud she is of me.” See what I said about heart?

This first season must have been something of a struggle for Ward. Though the pilot was accepted by the Frederator Studios production company with excitement in 2008, finding a network to pick up the show proved extremely difficult, and it wasn’t until 2010 that Cartoon Network decided to pick up the program.

“I think the first season we were just kickin’ ideas out the door really quickly,” said Ward. “I felt like I was really pressed for time. I still feel that, but I feel like now I feel we have a good grip on what we wanna make.”

And again we’re back to trying to define Adventure Time, which is a bit tricky. While its madcap nature is perhaps the most celebrated aspect, it has quieter moments as well. For instance, Ward points to an episode called “Thank You,” from season 3 (sadly not yet collected on DVD, but available on iTunes) as one that he was particularly proud of. In it, the titular Finn and Jake play ancillary roles while the mostly dialog-free episode follows a snow golem who befriends a fire wolf.

“I think it’s awesome that with a show called Adventure Time With Finn and Jake, we can just forget about Finn and Jake for a little bit and the network will just let us follow this creature around,” said Ward.

That kind of diversity of themes is probably one of the most defining features of Adventure Time. More than anything, it is a show that revels in its form, showing a real love for animation, music, and unique story lines. Asked what inspired him while working on the series, Ward points to some of the best sources. “Achewood is definitely my favorite web strip. I think it’s the best written thing on maybe the web or in print. I really like Chris Onstad’s dialog. So, it’s a big inspiration for me when I write,” he said. “I don’t think everyone else reads it, I think everyone else is just cool like that.”

Another source Ward draws from for Adventure Time is the classic roleplaying game Dungeons & Dragons, which our readers should be quite familiar with at this point. “Writing for the show is a lot like playing DnD,” said Ward. “I get all my dungeon crawls out in writing the show. Whenever Finn’s in a dungeon I always ask the board artists to write in that he picks up some gold and pockets some kind of loot. Something I would wanna do in that situation.”

Ward also points to The Simpsons as a major inspiration, particularly from his childhood memories of the show. He recalled having his mind “rocked” by an episode where Bart called Homer a “half-man half-monkey-type creature.” And while that joke may not blow his mind any more, its effect has stayed with him.

“That just makes me think about how this is the first thing that some kids are watching and all these ideas aren’t old hat to them,” he said. “I think a lot about exploding kids’ minds with the cartoon.” But that, in itself, seems to be an enjoyable burden for Ward. “Every now and then it’ll hit you that you’re job is to be entertaining the nation with your funny ideas. And then it’ll hit ya and freak me out a little bit, but I try not to think about it. I try to just have fun.”

“It can be a grind so I just want everyone to have fun,” he said. “I feel like I took that from my last boss Thurop Van Orman from when I was workin’ on Flapjack,” another Cartoon Network cartoon on which Ward worked in the two years Adventure Time spent searching for a home. Orman is now the supervising producer for Adventure Time, and clearly left a big impression on Ward.

“I was a board artist, and I always asked Thurop if I could go into the animatics room or look at how they were editing it, or look at the music behind the episodes. And he’d always say, ‘Of course you can! This is a fun factory, friend!’ It was a fun factory. So that’s what I am trying to do with my show.”

His parting advice to first time viewers: “You can skip around maybe and find stuff that you like in the show.” That shouldn’t be too hard. This labor of love shines out as the kind of show you want to share with people. So, the fun factory manned by a team of brainiacs works after all.