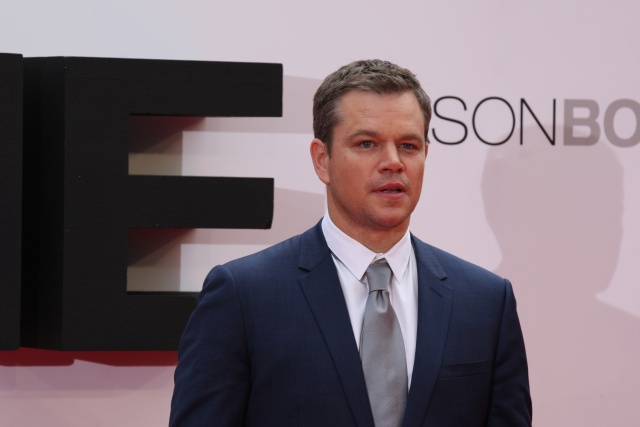 Man, there was a time when I really, really liked Matt Damon, but ever since the Project Greenlight fiasco, it has just been a downward spiral from cool liberal dude Matt Damon to “liberal dude mansplainer” Matt Damon.

While doing an interview with ABC for his upcoming film Downsizing, co-starring Kristen Wiig, Damon was asked about his feelings on Harvey Weinstein by Peter Travers, because, you know, he is the father of four girls. Four. Girls. Four. The entire interview is filled with delicious oblivious gems.

I think we’re in this watershed moment. I think it’s great. I think it’s wonderful that women are feeling empowered to tell their stories, and it’s totally necessary … I do believe that there’s a spectrum of behavior, right? And we’re going to have to figure — you know, there’s a difference between, you know, patting someone on the butt and rape or child molestation, right? Both of those behaviors need to be confronted and eradicated without question, but they shouldn’t be conflated, right? You know, we see somebody like Al Franken, right? — I personally would have preferred if they had an Ethics Committee investigation, you know what I mean? It’s like at what point — you know, we’re so energized to kind of get retribution, I think.

Guys, I know you all think we are just crazy feminists with deep desires to ruin the lives of all men, but believe it or not, we understand the nuances of different allegations of sexual misconduct. Al Franken is not the same as Harvey Weinstein, but that does not mean he should be allowed to just keep his position. Franken resigned, and yes, it was very much the result of pushing by his fellow Democrats, who wanted to have a moral high-ground considering the issue with Roy Moore and Donald Trump both facing much worse allegations. Which was politically the right move for the Dems in the long term.

When it comes to Franken, he denied the allegations against him and said he “remembered things differently,” even when it came to the nature of the photograph concerning his first victim. Multiple women have come forward to allege that he groped them or tried to forcibly kiss them. The defense that Franken used his position in the Senate to push bills for women in light of these allegations doesn’t make things better; it makes things worse.

But let’s say this: What if we waited for the Ethics Committee investigation and they just confirmed the stories about all the women? Then what? Would everyone be okay with him stepping down then? Probably not. Why? Because it’s not really about the due process. It is about wanting to prove women to be liars.

And we live in this culture of outrage and injury, and, you know, that we’re going to have to correct enough to kind of go, “Wait a minute. None of us came here perfect.” You know what I mean? … The Louis C.K. thing, I don’t know all the details. I don’t do deep dives on this, but I did see his statement, which kind of, which [was] arresting to me. When he came out and said, “I did this. I did these things. These women are all telling the truth.” And I just remember thinking, “Well, that’s the sign of somebody who — well, we can work with that” … Like, when I’m raising my kids, this constant personal responsibility is as important as anything else they learn before they go off in the world.

.And on this end of the continuum where you have rape and child molestation or whatever, you know, that’s prison. Right? And that’s what needs to happen. OK? And then we can talk about rehabilitation and everything else. That’s criminal behavior, and it needs to be dealt with that way. The other stuff is just kind of shameful and gross, and I just think … I don’t know Louis C.K.. I’ve never met him. I’m a fan of his, but I don’t imagine he’s going to do those things again. You know what I mean? I imagine the price that he’s paid at this point is so beyond anything that he — I just think that we have to kind of start delineating between what these behaviors are.

Yeah, and Louis C.K. only took personal responsibility because he got caught. He denied the allegations before, dismissing them as rumors, and if the article hadn’t come out, he would have continued to deny it. He didn’t say sorry to the women for what he did, and he still hasn’t done anything to correct the issue. So what personal responsibility? There has to be something between prison and nothing and if right now all it is is professional exile, then so be it.

Also, because you don’t imagine him doing this again, that means he has paid the price? And how do you know he won’t? Because you are a fan?

I just. I want to flip the table, because this is just such bullshit. Like you realize women lose roles and have their careers dragged for much-much less, right? Nothing in Damon’s statements shows concern for the women or any of the victims. It’s only about the overarching effects for these dudes. Plus, this line: “I imagine the price that he’s paid at this point is so beyond anything that he — ” made me feel like he had to just stop himself from saying that C.K. suffered more than the victims, because we are still arguing that jerking off in front of  women … isn’t really that bad.

The final straw for me is towards the end, where Damon talks about an imaginary situation where if someone lied and made a claim that Matt Damon assaulted them in the past, you were able to just pay the money and get a confidentiality agreement, but now:

Now … with social media, these stories get — it’s like they get gasoline poured on them. So the moment a claim is made, if you make that same claim today to me, I would be scorched earth. I’d go, “I don’t care if it costs $10 million to fight this in court with you for 10 years, you are not taking my name from me. You are not taking my name and my reputation from me. I’ve worked too hard for it. And I earned it. You can’t just blow me up like that.” So I think once a claim is made, there will no longer be settlements. That’s just my prediction, I mean, just based on what I’ve seen.

Damon says that this is a good thing, but it doesn’t feel like it—not when he’s promoting a narrative that paints women as gold-diggers and manipulators. Please, please PR people, prep your stars about how to handle this issue, because it’s plain to see that, even amongst men who say they respect and care about women, they still have a hard time understanding that you don’t rank women’s sexual trauma as a way to feel better about guys you like.

Before we want to start writing redemption songs for people, can we at the very least make sure they actually prove themselves to be worth that kind of trouble? The first step is actually being sorry. Not reactionary sorry.