Wow, Louis C.K. Did the Bare Minimum in Admitting Allegations Are True, Let’s Throw Him a Freaking Parade 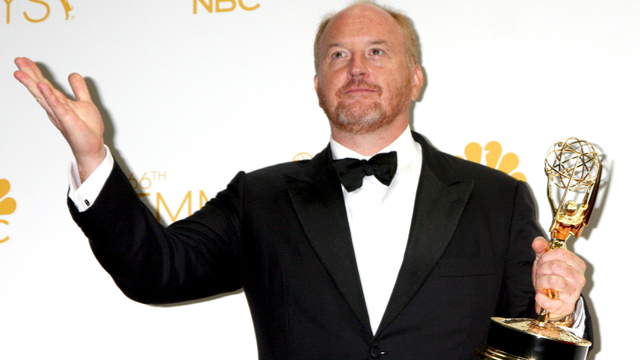 His statement (which you can read in full here or by expanding the tweet below) stands out from others released by similarly accused men because he doesn’t deny the claims or deflect them like Kevin Spacey did when he came out as gay instead of addressing charges of pedophilia. Instead, he admits “these stories are true.”

In that way, he stands apart from nearly all other men in his situation. And that’s the closest thing to praise I’m willing to offer.

Louis CK has put out a statement. "These stories are true," he says. pic.twitter.com/8oCH7YhqnF

I’m seeing a lot of “kudos” and “well done” responses to this “apology” and I simply don’t understand. To start with, it’s not an apology.

He does not apologize to the women. The closest he comes is to say he “can hardly wrap my head around the scope of hurt I brought on them.” (He also says “The hardest regret to live with is what you’ve done to hurt someone else” because this has all been really hard on him.) He offers more of an apology to the casts and crews of his various projects “who’s [sic] professional and personal lives have been impacted by all of this.” He also regrets the “negative attention” brought to his manager.

Louis CK proudly edits his own work, but another pair of eyes might have suggested cutting at least one of the four times he said his victims "admired" him.

Let’s not forget that Louis C.K. has spent years denying these stories and many others.

Everyone applauding Louis CK "owning up" in apology: he did it because NYT report and women going on the record forced him to.

Here he is, just two months ago: “They’re rumors, that’s all that is.”https://t.co/e7DlcUIOka pic.twitter.com/FtAmy0GDYW

Never forget that Louis CK spent YEARS saying—to the world and his victims who were listening—that nothing happened and he didn’t care pic.twitter.com/0Jfnd5ZNZc

“I finally see how deeply my actions have affected other people emotionally since they are now affecting me financially.”

In his statement, C.K. writes, “At the time, I said to myself that what I did was okay because I never showed a woman my dick without asking first, which is also true. But what I learned later in life, too late, is that when you have power over another person, asking them to look at your dick isn’t a question. It’s a predicament for them.”

Louis CK literally doesn't get that it's not ok to ask women you work with if you can take your dick out.

The scenario he’s painting here is one in which he thought he was asking for a consensual sex act and simply didn’t know what was or wasn’t appropriate. We’ve heard this before, from men like Andy Dick and Roy Moore, who equate sexual harassment and assault with an attempt at “dating.” But C.K.’s own actions prove that’s bullshit.

In the New York Times story, which C.K. has confirmed as true, some of the women recall receiving calls and emails from him, apologizing for what he’d done. The Guardian similarly reported that he sent a Facebook message to one woman three days before FX announced Louie, saying he knew he was being a “repulsive person.” This is an actual quote:

"I always liked you and I felt bad looking back on what happened,” he said. "Anyway, I’m all better now! Wee!”

In at least one of these instances, he apologized for the wrong act. He did this with such frequency that he couldn’t keep straight whom he had locked in a bathroom and whom he had asked for permission first. Does anyone actually believe he didn’t know these acts weren’t consensual? Do we believe that he not only didn’t thing he was abusing his power, but that that wasn’t the entire point?

Guys like Louis CK could just pay a sex worker. Could even request the sex worker play like she's uncomfortable if they likes. But they don't want that. The pleasure is in the actual discomfort of their victims, the power to overwhelm or make them just take it. It's horrendous.

He also felt comfortable enough to put this tag on himself in an episode of Louie:

Knowing what we know now, is that joke really at his own expense? Or is it a mocking sort of dare to out him for the nonconsensual “masturbator” he is? Can you imagine what that joke must have felt like to any of his victims?

We’re glad Louis C.K. is done denying he’s a serial abuser. But that’s it. This isn’t a great apology, and it does nothing to undo all the damage he’s done to women over the years. Hell, he explicitly states in his opening sentence that he is only owning up to the five women who spoke to the NYT, when the “whisper network” where these accusations have been confined until recently has plenty more stories.

So good job, Louis C.K., for doing the exact bare minimum we hope for when a man is outed as a serial workplace abuser.