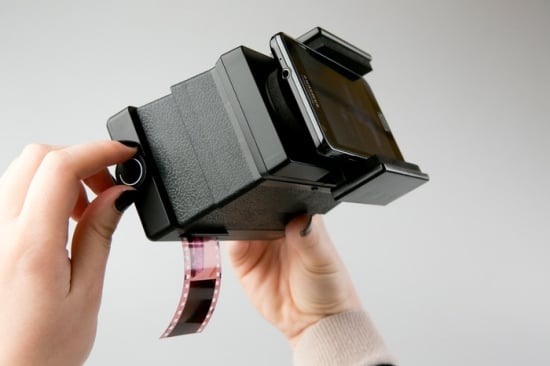 There are a lot of apps like Instagram to make the pictures you snap with your smartphone look like old 35mm film prints, but as far as we know there aren’t any that take your actual 35mm film and digitizes it. Lomography wants to change that. They’re launching an app and the Lomography Smartphone Film Scanner to give photographers the ability to take archival quality scans of their film. Looks like it’s time to bust out that old box of film, or to explain what film was to your kids.

The percentage of photographers who still shoot on 35mm film is dwindling, but that last faction still holding on are passionate about it — You have to be at this point. One big advantage people shooting on their smartphones have over their analog brethren is that it’s much easier to share a picture from a smartphone than from a strip of celluloid. Lomography’s film scanner hopes to bridge that gap by making it easier to get from film to phone, and letting analog photographers share just as easily as the rest of us.

Film scanners are nothing new, but Lomography’s app and scanner combo would greatly speed up the workflow of anyone looking to get their film photos onto their smartphones. Instead of scanning the film to a computer, saving the image, and then sending it a smartphone, photographers can now capture the image directly onto the phone.

The scanner itself seems like it’s little more than a box with a backlight built to align the film with the camera on a smartphone, and is probably something someone could dummy up themselves. They claim it works with all iPhone models and most Android phones.

The free app is what makes the project seem interesting. It lets users reverse negative images, piece together panoramas, or even animate a series of photos. Those are all things other photography apps can do, but in the spirit of making it easier to bring analog photos to a phone, it’s nice to have them all in one place.

The project is currently on Kickstarter with 18 days left, but they’ve already more than doubled their $50,000 goal. Supporters who come in at $50 or more get the scanner, and there are a lot of other incentives, but many of them are limited and going fast. If you’re looking to support Lomography and snag some of their gear in the process now’s the time to act.