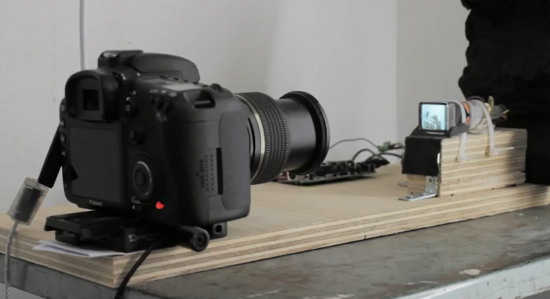 You’ll find people who love Instagram, and people who hate Instagram, but it’s rare that you’ll find someone who thinks that Instagram just doesn’t go far enough. Rest assured, they exist, and Martin Ström, Ruben Broman, and Erik Wåhlström are three examples. That’s why — for both kicks and art — they teamed up to create the InstaCRT app, which doesn’t just apply a CRT filter for your photos, it literally photographs them being displayed on a real CRT.

Imagine if Instagram, instead of putting a Polaroid-esque filter over your pictures, actually printed them out of a Polaroid camera and then took a digital picture of that and sent it back to you. That is exactly what InstaCRT does, except with a CRT display. Just upload your image to the app, and it takes a quick trip to Sweden, where it pops up on a CRT display where it’s photographed and sent back to you. The whole process takes about half a minute.

It seems like a one-of-a-kind we-just-did-this-for-ourselves-look-at-how-cool-we-are sort of project, but the InstaCRT app is actually available to anyone who wants to use it. The app is available on the (Swedish) App Store for a mere 15 kronor (distinctly different from the Danish kroner, apparently) or around 2 dollars. Sure, Instagram is free, but authenticity doesn’t come for free. Whether or not it’s really worth it is another question, but whatever your take on photofilters, I think we can all agree this is sort of cool.

Relevant to your interest in pictures of things