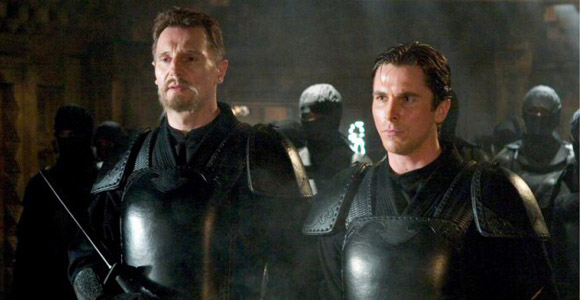 We love him for a plethora of reasons actually but this is why we’re happy today. Actor Liam Neeson has given us solid information on Christopher Nolan’s The Dark Knight Rises. Hit the jump if you’d like to know what it is (semi-spoilery of course).

There were rumors around the middle of last year that Neeson had been seen on the set of TDKR but that’s all anyone knew. Well, Neeson has confirmed to ShowBizSpy that he has indeed filmed a scene for TDKR.

“I can tell you nothing about Dark Knight Rises, seriously,” Neeson told them while discussing him reprising his role as Batman’s enemy, Ra’s al Ghul. “I was on set for maybe an hour-and-a-half and the director didn’t tell me anything of what it’s about. So, I’m being very honest when I say I have no idea what’s going to happen.”

I love how Neeson, ultimate badass, sounds like he’s scared about his personal safety while talking about the film in even the most vague sense. Nolan has spies everywhere…

But in all seriousness, it’s very cool news to have confirmed. Many bat-fans assumed Neeson would be back seeing as how Nolan cast a young Ra’s in actor Josh Pence but we’re still unsure how he’ll be used. Will Neeson only appear in flashbacks? Or will Nolan decide to go outside his realistic comfort zone and incorporate the Lazarus pits we already know are making an appearance in the film. For those of you who don’t know, in the Batman mythos, Lazarus pits are a sometimes natural occurring, sometimes chemically assisted phenomena Ghul uses to cure those at death’s door, namely himself, for centuries. Side effect? Some madness.

Either way, he’s one of my favorite actors so I’m excited he’ll be making an appearance.