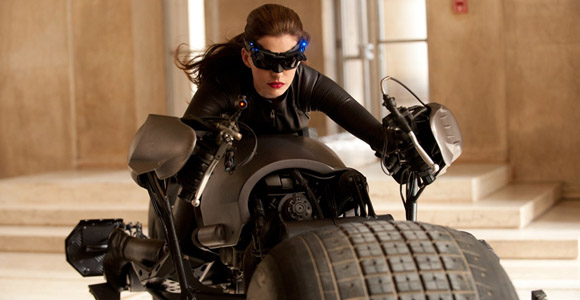 Cast members of Christopher Nolan’s The Dark Knight Rises have been giving the smallest bits of information they could give about the film in recent interviews. But Anne Hathaway recently got to chatting with Hero Complex and gave a whole bunch of info about her character Selina Kyle, Gotham City and more! Read on, spoilers will be covered up.

And Hero Complex made an interesting observation about her costume from a scene they viewed. Particularly her boots. “Hathaway, navigating the steps with stiletto heels that, on closer inspection, turn out to have serrated edges capable of leaving nasty claw marks in a fight. She also wears high-tech goggles that, when not in use, flip up and resemble feline ears.”

We knew about the goggle/ear thing but not the stiletto saws. I still may not like the character having heels at all but the fact that they will actually serve a purpose makes me feel a bit better. Plus, this makes some footage I saw of her stunt double a while back make much more sense. What I saw did not look like straight up heels, although set shots of Hathaway herself seem to say otherwise.

Hathaway also had a bit to say about her characters’ comic book past. “I really got into the comics after I was cast and I like that when she made her first appearance she meets Bruce Wayne and says ‘Let go of me or I’ll claw your eyes out,’ and he says, ‘Careful, claws in or papa spank,’” she said. “So I’m glad we’ve come a long way since then. I’m not saying anything against Bob Kane, though.”

And speaking of Kane, the Batman co-creator had said in the past that he took inspiration for Catwoman from movie star Hedy Lamarr. So, Hathaway did what great actresses do and did research into her films. “I know this sounds odd, but her breathing is extraordinary,” she said. “She takes these long, deep, languid breaths and exhales slowly. There’s a shot of her in [the 1933 film] Ecstasy exhaling a cigarette and I took probably five breaths during her one exhale. So I started working on my breathing a lot.”

Now here’s a bit of the film the site describes along with a line from Hathaway (highlight to view):  “Gotham City is a war zone. A ruthless madman named Bane has ripped away any sense of security and the citizens, haggard and clutching suitcases with refugee anxiety, sit behind barbed wire waiting to see what will blow up next. A hooded prisoner is dragged in – it’s Bruce Wayne, one of Gotham’s most famous faces – but the eyes of the crowd go instead to the woman in black standing at the top of the staircase. ‘Sorry to spoil things, boys, but Bane needs these guys himself,’ says sultry Selina Kyle.”

Of Gotham City itself, Hathaway had this to say. “Gotham City is full of grace. You look at Heath’s performance as the Joker, there was a lot of madness there but there was also a grace and he had a code there. There’s a lot of belief and codes of behavior in Gotham and my character has one, too. A lot of the way she moves and interacts with people is informed by her worldview,” she said. “Chris has given us all such complex, defined, sophisticated worldviews that it’s just a matter of doing your homework and getting underneath the character’s skin.”

Obviously, Hathaway is stepping into a very iconic role but as far as her approach she says she went in trying to make it her own. “What’s come before doesn’t limit or even affect this new version,” she said. “It doesn’t affect me because each Catwoman – and this is true in the comics as well – she is defined by the context of the Gotham City created around her. Catwoman is so influenced by Gotham and whoever is creating Gotham at the time. Michelle Pfeiffer’s Catwoman was informed by Tim Burton’s Gotham and Eartha Kitt was informed by Adam West’s Gotham. You have to live in whatever the reality of the world is and whatever Gotham is.”