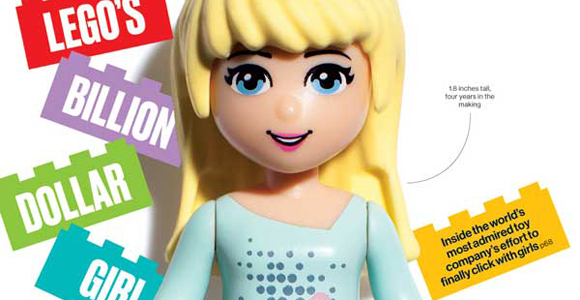 Lego recently came under fire for failing to offer girl’s name choices for their online Hero Recon toy customization program. They quickly listened to consumers who, at the very least, thought it was a glaring oversight and added new names to the list. Well, little did we know they had a HUGE GIRLY ANNOUNCEMENT tucked up their sleeve. “Let’s be honest: Girls hate him,” Mads Nipper, the executive vice-president for products and markets said of their yellow, little minifig people. “The greatest concern for girls really was beauty,” says Hanne Groth, Lego’s market research manager, after studying girls. So, they’re not actually called LadyFigs, the new line is called Lego Friends but either way, we’re off to a rough start here.

Bloomberg Business Week did a feature on the new collection. They write, “Twenty-nine mini-doll figures will be introduced in 2012, all 5 millimeters taller and curvier than the standard dwarf minifig. There are five main characters. Like American Girl Dolls, which are sold with their own book-length biographies, these five come with names and backstories. Their adventures have a backdrop: Heartlake City, which has a salon, a horse academy, a veterinary clinic, and a café. ‘We had nine nationalities on the team to make certain the underlying experience would work in many cultures,’ says Nanna Ulrich Gudum, senior creative director.” 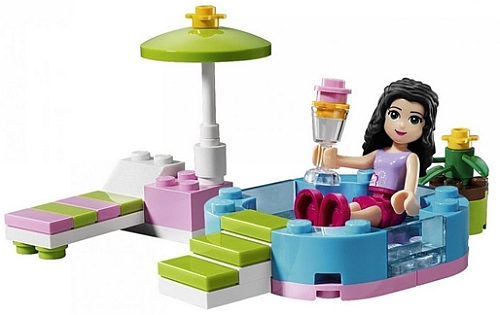 I’m sorry, you lost me at “taller and curvier.” I’m not against “stuff for girls” but this line is already hitting several sour notes. I don’t understand what exactly is wrong with the regular female minifigs. Legos are blocky, that’s the point. My Lego does not need protruding breasts.

Here’s the background behind this latest move.

Over the years, Lego has had five strategic initiatives aimed at girls. Some failed because they misapprehended gender differences in how kids play. Others, while modestly profitable, didn’t integrate properly with Lego’s core products. Now, after four years of research, design, and exhaustive testing, Lego believes it has a breakthrough. On Dec. 26 in the U.K. and Jan. 1 in the U.S., Lego will roll out Lego Friends, aimed at girls 5 and up. …The company’s confidence is evident in the launch — a full line of 23 different products backed by a $40 million global marketing push. “This is the most significant strategic launch we’ve done in a decade,” says Lego Group Chief Executive Officer Jørgen Vig Knudstorp. “We want to reach the other 50 percent of the world’s children.”

And look! She’s even a cover model! 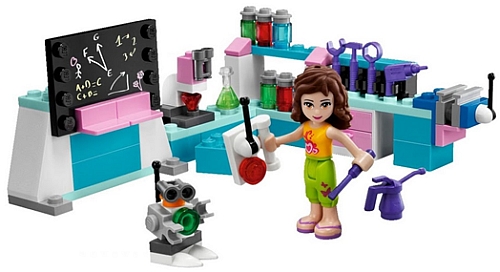 WALL-E? Is that you?

“The girls needed a figure they could identify with, that looks like them,” said Rosario Costa, a Lego design director. Girls told them, “I want to shrink down and be there,” after playing with the toys. But was this exaggerated route really the way to go? An expert, not from Lego, also weighed in.

“If it takes color-coding or ponies and hairdressers to get girls playing with Lego, I’ll put up with it, at least for now, because it’s just so good for little girls’ brains,” says Lise Eliot, a neuroscientist at the Rosalind Franklin University of Medicine and Science in Chicago and author of Pink Brain Blue Brain. 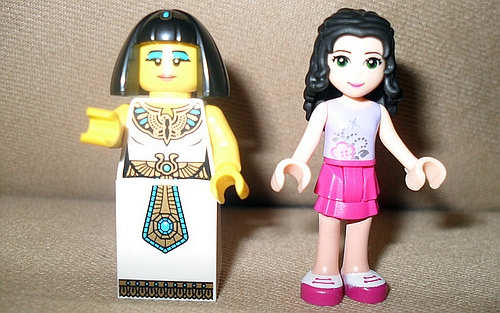 Eliot also said, “Especially on television, the advertising explicitly shows who should be playing with a toy, and kids pick up on those cues. There is no reason to think Lego is more intrinsically appealing to boys.”

And isn’t that the real issue? Legos aren’t “for boys,” the media and marketing just tell us they are. They reinforce this kind of gender separation when perhaps, it doesn’t necessarily have to be there. Here’s my thing: We don’t want you to ignore girls entirely but we also don’t want or need you to make toys for girls so blatantly obvious. It makes me wonder if they used the regular female minifigs with the newly designed sets in their focus groups if girls would be just as interested. Granted, I don’t think this is all bad, giving the characters backgrounds is good, having multiple nationalities is good but the way Lego is talking about it is bad.

Though perhaps some people are attempting to help. Business week says, “In the U.S., Wal-Mart, Toys “R” Us, and Target all plan to carry Lego Friends. Target’s Stephanie Lucy, vice-president and merchandise manager for toys and sports goods, says the Minneapolis-based department store will introduce Lego Friends on an end-cap (at the end of an aisle), then shelve it with other girl-oriented toys, not with the rest of the Lego—all currently in the boy section.”