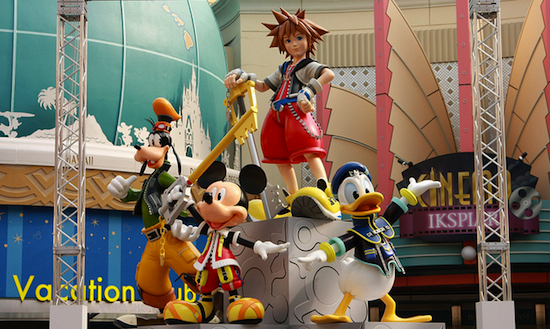 Never since the Street Fighter franchise have we waited so long for the next proper installment in a video game series. Our patience for Kingdom Hearts III has been worn thin of late with each side story, rehash, and side story rehash that’s been released after Kingdom Hearts II, further delaying the long awaited closure we’ve been working toward for the past 11 years — man, history does repeat itself. It appears as though we may be waiting even longer. Jesse McCartney, the heavenly voice behind Sora’s doppelganger Roxas, posted a picture on Instagram showing the inside of the recording studio with the caption: “For all you ‘Kingdom Hearts‘ Fans. Recording the next chapter! #KingdomHearts #Roxas #Gamers.” Regrettably, judging by the game footage, this “next chapter” is likely Kingdom Hearts HD 1.5 Remix and not Kingdom Hearts III. You may now commence your disapproving shake of the head.

The powers that be have since pulled McCartney’s picture off Instagram — c’mon, it’s not like we haven’t already played the original Kingdom Hearts, Chain of Memories, and 358 Days/2 —  but that hasn’t prevented it from spreading elsewhere. This is the Internet, after all. A NeoGAF user screengrabbed and posted the very image while a video also surfaced showing McCartney recording some anguished guttural noises for Roxas:

Square Enix first announced Kingdom Hearts HD 1.5 Remix during last year’s Tokyo Game Show, slated for a release solely on the PlayStation 3 gaming console. But seeing as how it’s merely a retread of the same path we’ve walked before, is anyone — aside from the most adamant of Kingdom Hearts fans — going to even bother picking it up once it reaches North America? Not that it matters since Mickey Mouse will find a way to coerce us into buying in.

You can watch the TGS trailer for Kingdom Hearts HD 1.5 Remix below:

(NeoGaff via IGN, image via nagi)