We’ve been accused of being too hard on Nintendo since the Wii U launched last year, but I put it to you that it’s just a case of tough love. That’s why I was so glad to see them doing something we can all get really excited about — new Zelda games, aka the only reason anyone buys new Nintendo consoles! In a Nintendo Direct video released today, Nintendo president Satoru Iawata outlined some big things coming for the Wii U like new games, software updates, and most importantly — new Zelda!

So far the Wii U hasn’t impressed us here at Geekosystem. I had the chance to play some of the Nintendo Land mini-games and didn’t find the experience as much fun as I hoped, but there’s a Triforce-shaped place in heart that always has room to love another Zelda game. Of all the announcements in today’s Nintendo Direct video, I’m most excited about the Zelda games.

Before we get a truly new Zelda adventure on the Wii U, we’ll see an HD remake of Wind Waker with better graphics and altered gameplay that will likely center around the GamePad controller and Wii Remote. Wind Waker is one of my favorite Zelda titles despite the cartoonish design. The new graphics still look cartoonish, but they’re at least more beautifully rendered. 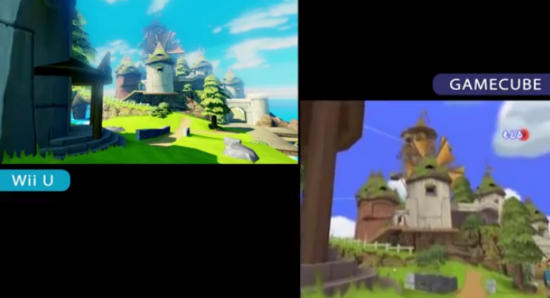 I’m still not 100% sold on the GamePad, but if there’s any way to get me to love it, it’s to make me use it to replay a game I already enjoy.

Details of the new game in the series are sparse, but Legend of Zelda director Eiji Aonuma says they’re focusing on breaking some of the conventions of the series. Specifically, he called out requiring players to beat dungeons in a specific order and the need to play alone. Could this mean multiplayer is finally coming to Zelda? Maybe, but based on what I’ve already played on the Wii U, I wouldn’t be surprised if it just turns out a second player can hold the GamePad and manage your inventory or something dumb while someone having actual fun does the adventuring.

Iawata also mentioned updates to the Wii U software which will make launching software and games faster, and cut down on the ridiculous amount of time it takes to get back to the menu. The software updates will come in the spring and the summer, with incremental improvements with each, and the spring update wil also bring players the Wii U Virtual Console service.

It’s taken a few months, but it looks like Nintendo is finally shaping the Wii U into a playable system. You can watch the full Nintendo Direct video below to get the details on all the news, including all the other new games that I care much less about than Zelda.

(via Nintendo, image via iAMiAN_)