J.J. Abrams to Receive Ally Award From Athena Film Fest—Here’s What I Hope He Keeps in Mind Moving Forward 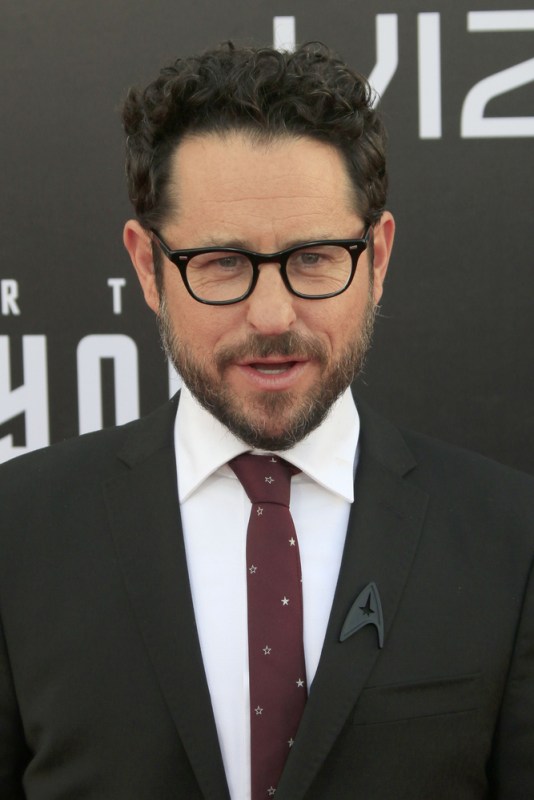 At a time when we’re (very happily, mind you) dragging abusive men for their sexist, abusive conduct in all fields, it becomes even more important to shine a light on those who are genuine allies as examples to follow; those who are fighting like hell against their patriarchal programming to make the world a more just and loving place. The 2018 Athena Film Festival will be awarding J.J. Abrams as such a person.

According to The Hollywood Reporter, J.J. Abrams will be receiving the film festival’s Leading Man award in recognition of “his ongoing support and advocacy of women in the entertainment industry.” The award will be presented at the Athena Film Festival in New York City in February.

In a statement, Athena co-founder (and founder/publisher of Women and Hollywood) Melissa Silverstein said that Abrams “has been championing women in the industry throughout his entire career, and through his leadership has continued to push the gender equality conversation.” Festival co-founder Kathryn Kolbert adds, “At this time, it is particularly important for us to recognize men who are standing strong with women and joining our call for gender equality. He is a true ally and we are incredibly proud to have him on our side.”

Meanwhile, Abrams seems proud to be on our side as well saying, “I am deeply humbled to be recognized by the Athena Film Festival. Any good I’ve done has been achieved because I have worked alongside women, and I share my gratitude with all of them for being honored with this award.”

He has not only created nuanced female roles like Felicity Porter, Sydney Bristow, Olivia Dunham, and The Force Awakens‘ Rey, but he also puts his money where his mouth is and hires women.

His long-time editors are Maryann Brandon and Mary Jo Markey, who’ve worked on every single film he’s directed after starting with him on Alias. Markey worked on Felicity and has edited all of Abrams’ TV shows, winning an Emmy for her work on Lost.

His showrunner/creator for Hulu’s 11.22.63? Bridget Carpenter. The co-showrunner for his HBO hit, Westworld? Lisa Joy, who created the show with her husband, Jonathan Nolan.

His director for the upcoming Bad Robot/Paramount film Kolma, starring Daisy Ridley? Marielle Heller, who is also writing the project with Megan Holley. His director for Lou, the story of the search for a kidnapped child? Anna Foerster, who made her feature directorial debut with Underworld: Blood Wars and will be directing a script written by Maggie McGowan Cohn that landed on the 2015 Black List of the best unproduced screenplays.

In addition to hiring women, he listens to women. One of his major mentors throughout his career has been Kathleen Kennedy, who eventually offered him the opportunity to direct a Star Wars film. A pivotal moment in The Force Awakens was so powerful because Abrams took the advice of Ava DuVernay. He says regularly that he takes his wife, Katie McGrath’s (not the one from Supergirl, the one who’s currently an exec at Bad Robot), advice all the time, from the decision to direct The Force Awakens in the first place, to laying off the lens flares.

This is in addition to amplifying the work of people of color, both in front of and behind the camera. Star Wars now has two male leads of color because of him, and has just added a prominent woman of color in Rose Tico (and while she’s obscured in VFX, we still get to enjoy the talents of Lupita Nyong’o as Maz Kanata). Abrams created the (sadly) short-lived show Undercovers (starring the always-awesome Gugu Mbatha Raw!) about a black married couple who also happen to be spies. The upcoming installment in the Cloverfield series (formerly known as The God Particle) stars Mbatha Raw and David Oyelowo. And that’s in addition to producing the work of Jordan Peele and Justin Lin, among others.

It’s no secret that Abrams is one of my biggest role models in this industry, both for the stories he tells and for the kind of person he is within the industry. He’s one of those rare people about whom no one really has a negative word to say. He’s like the Tom Hanks of director/writer/producers. He’s done a lot for women and people of color throughout his career, and this award is richly deserved.

That said, I think he would be the first to acknowledge that there’s always more work to do. Here are a couple of things I hope he continues to think about after he accepts this award in February:

1 – Look at the numbers and do even better by competing against yourself. Here are Bad Robot’s stats, based on the full list of production credits that are up on their IMDb Pro page:

Five percent of your films directed by women is certainly a bit higher than the Hollywood average of 4% through 2016. However, it’s still not a huge number. It’s nowhere near 50%, which is where it should be. The stats for female writer/creators are much better and have jumped up in the past couple of years, but again, 22% isn’t 50. Bad Robot’s doing better than much of Hollywood…but that’s not saying much, which is why my hope is that Abrams and Co. compete against themselves on this front, so as not to be satisfied simply by “doing better than” not-great.

2 – Learn from past mistakes. Abrams already seems really good at this and seems to have zero problem acknowledging when he may have erred (*cough*Khan being a “secret” in Into Darkness*cough*). Sexism and patriarchy are deeply ingrained in the fabric of our society, and so it goes that even the most well-meaning allies can fall into certain traps. From Alice Eve stripping down without context in Star Trek Into Darkness, to Bad Robot’s obsession with “daddy issues” at the expense of mothers, there are certain film and TV tropes that Abrams has latched onto as a director, writer, and producer, simply because they are what he’s grown up with, or what he’s used to.

When writing women (when he’s not hiring women to write them, that is), I want him to push his own boundaries about how he thinks they should be written. It’s not just about making them “badass,” or the nostalgia-tinged, alabaster-skinned, dewy-eyed object of a protagonist’s affections. It’s about making them people.

3 – Support your female directors as much as you support your male directors. This was a glaring example of the subconscious difference between how male and female directors are treated. Directors J.D. Dillard (Sleight) and Morgan Dameron (Different Flowers) have both previously worked as Abrams’ assistant at Bad Robot. Dameron ended up being honored in The Force Awakens by having her last name given to Poe! Both had their debut feature films released this past year. However, when Dillard’s film came out, it was acknowledged by Abrams with a handwritten note:

Meanwhile, the only attention Dameron’s film got via Bad Robot’s social media was a retweet of their own tweet containing the trailer: 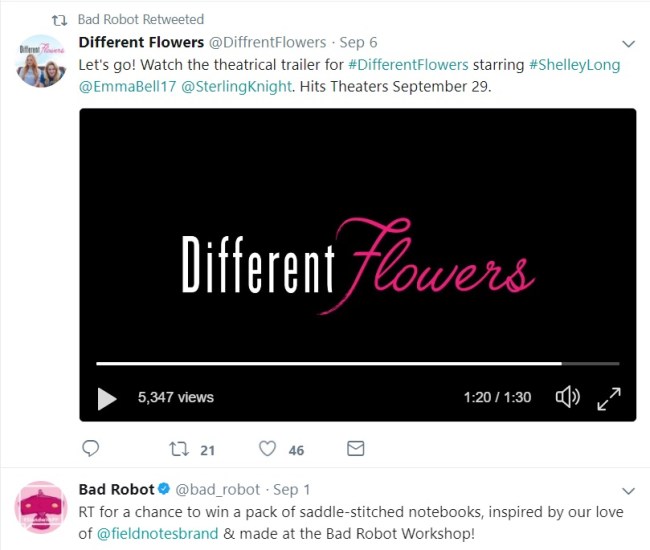 Do I think Abrams was being purposely malicious? Of course not. And I happen to have heard through mutual friends that Dameron received a lot of help from Abrams behind the scenes as she was cutting the film, for which she is extremely grateful.

That said, amplification is important. And it’s telling that his instinct when it comes to male directors is to promote their work very personally, whereas I’ve not yet seen him do that for any of his female directors (or if he has, I missed it. I’d love to be wrong about this). Hiring women is important. So is supporting them publicly.

I’m toughest on the people and things I love the most because I hold them to a higher standard. I’m a huge fan of Abrams, his work, and Bad Robot as a company, and I’m saying all this, because I know they have it in them to be even better and set an example for the rest of Hollywood. With this award from the Athena Film Festival firmly in hand, I challenge Abrams to challenge himself.