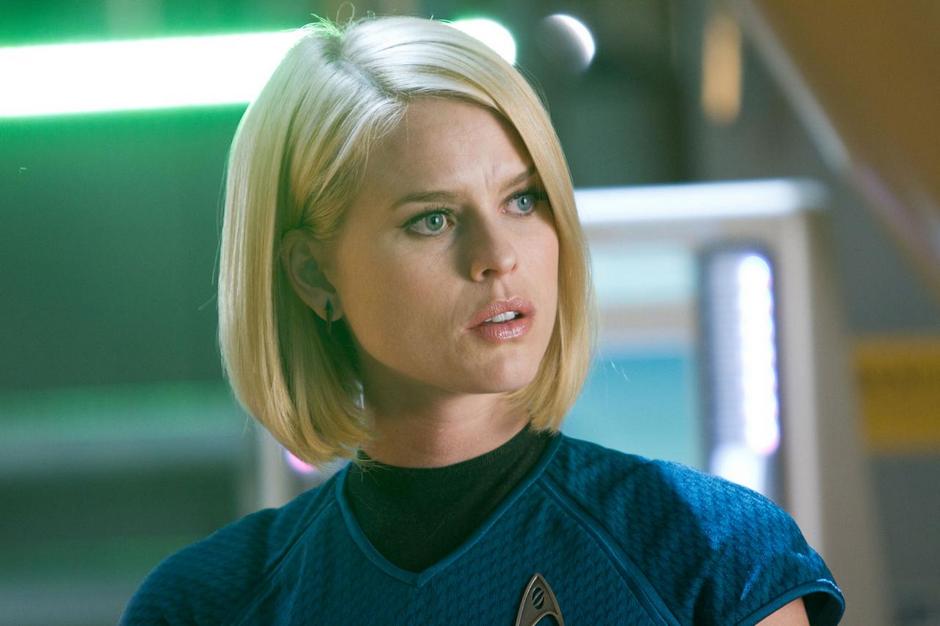 In Star Trek Into Darkness, it seemed that Alice Eve’s Carol Marcus was being set up to be a more permanent part of the Kelvin Universe. While she wasn’t in a lot of the film, she was integral to the plot, and the crew relied on her expertise. That, plus the fact that outside the Kelvin Universe she ends up being the creator of Project Genesis (as well as the mother of Kirk’s son), led many to believe she’d end up in Star Trek Beyond somehow. Except she didn’t.

As reported by The Playlist, Star Trek Beyond co-writer and star, Simon Pegg, appeared on Engage: The Official Star Trek Podcast this week to discuss the film. Among other things, Pegg was asked about Carol Marcus’ absence from the film, and if there was ever a version in which she was. Here’s what Pegg had to say:

“With this it felt like we would under-serve her if we included her, she might end up feeling like she hadn’t been given the amount of screen-time she deserves, so rather than bring her in and just have her be a supporting role, like, have her not be in this one, and when the time comes [bring her back], the worst thing to do would be to have her in the film and have that character be killed, and that felt like a cynical thing to do. We thought rather than have Carol Marcus not be used to a reasonable capacity, let’s just not include her, have her be alive, in canon, and ready to come back at any time.”

While it’s troubling that the only way that Pegg thought she could’ve possibly been included in Beyond is “to have her in the film and have that character be killed,” (really? That’s the only way two talented writers could think of possibly including her?) I’m glad that he respects the character enough to want to do her justice, and I hope she returns.

After all, even the original Carol Marcus, Bibi Besch, thought that the character was underserved in Star Trek II, and was upset that they couldn’t find a place for the character in Star Trek III. In an interview for the 1991 book The Making of the Trek Films, Besch said “There was a little bit more about [the Kirk/Carol] relationship that didn’t end up on the screen. But not much, really. It was sketchy to begin with. Sometimes, I think of my character as just a lot of exposition–a means of getting to the plotline. I would love to do a future Star Trek with a little more exposition.”

Carol Marcus was a problematic character to begin with. She was created as this intelligent scientist who is a “match” for Kirk, an ostensibly feminist character, but as she was written and directed in The Wrath of Khan, she wasn’t really given much of an inner life and was there solely to introduce Project Genesis and Kirk’s son, David. That’s it. Then, in Star Trek III: The Search for Spock, it’s David who’s the Genesis scientist. Because God forbid a woman be the primary scientist two films in a row.

According to Memory Alpha, Carol Marcus was originally in The Search for Spock, but was written out, because she was “extraneous”:

Harve Bennett decided not to use her in the story, as a cut-back to that film’s budget. (Trek: The Unauthorized Story of the Movies, 3rd ed., p. 87) Though Bennett originally included Carol in the story outline for the movie (later saying, “I thought it might be fun to have her relating to David and have something going with Saavik”), he subsequently deemed the character extraneous to the story and had some difficulties with how to logically account for her having known about David Marcus using unstable protomatter in the Project Genesis matrix. Thus, Bennett not only excised Carol from the third film but also imagined that she had no knowledge of her son’s use of protomatter in the matrix. (The Making of the Trek Films, 3rd ed., p. 46)

I understand budgets are a thing…but why cut Carol instead of David when she’s the one who conceived of Project Genesis in the first place? Why were father-son feels deemed more important than Kirk’s complicated relationship with his son’s mother? Why are male relationships deemed more important and substantial, and why are men’s relationships with women automatically romantic in nature except in very rare cases? Sure Carol and Kirk have a history, but that history didn’t need to dictate their present in those films. Does this mean that their relationship couldn’t stand or didn’t require further evolution?

So many decisions made about Carol Marcus are the inevitable product of male writers and directors not having a real idea how to write women except as girlfriends/wives or mothers. Which is unsurprising when you read that Nicholas Meyer, writer and director of Wrath of Khan, said of casting Carol in an interview in Star Trek: The Magazine, “I wanted a woman who was beautiful and looked like she could think; a woman who was attractive enough that you could see why Kirk would fall for her, and at the same time somebody who could keep up with him. I felt that, if it was to be any kind of meaningful or long-lasting or memorable relationship, she had to have more than just looks. She had to be intelligent.”

As if smart women and intelligent women are polar opposites, and therefore, difficult to find and cast — highlighting the fact that when people look at beautiful women, they assume they have no brains. Or they assume that all intelligent women are unattractive. As if Kirk, a 23rd Century man who’s had sex with aliens, has and desires only one physical type of woman. (I would argue that the character doesn’t, but the writers who write him do.)

Here’s the point of all my rambling about Carol Marcus: despite the asinine decision to have Carol inexplicably decide to change uniforms in front of Kirk in Into Darkness, I think the Kelvin Universe provides a huge opportunity to redeem the character. Despite what was possibly being set up in that undressing scene (i.e., a future relationship with Kirk), the films do not have to go that way.

That’s the beautiful thing about reboots and remakes. They give artists the opportunity to course correct, fixing things that in hindsight might not have been the best calls at the time while staying true to the spirit of the thing being adapted. It would be truly revolutionary if Pegg, or whoever writes the fourth film in this franchise, managed to create Carol Marcus anew. Managed to, perhaps, extricate her from her romantic connection to Kirk and figure out what can make her tick on her own. Have them be — shocker of shockers — really good friends. Or if there is a romantic connection, making it a deep one that lasts, rather than one Kirk has to shy away from in the name of adventure.

New timeline, new rules. If Vulcan can be destroyed, Spock and Uhura can have a relationship, and Sulu can have a husband, Carol Marcus can be more than expository window dressing.