Internet Archive Has a Bunch of Dragon Magazine Scans, But Maybe Not for Long 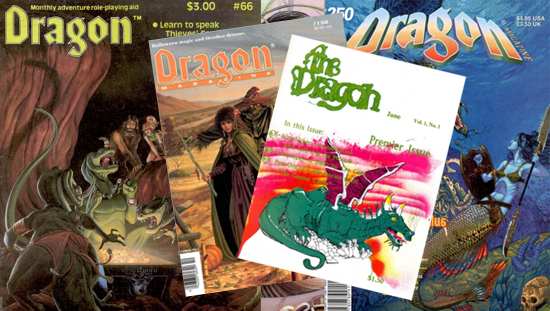 This is terrific news for Dungeons & Dragons geeks, but I’m also wondering if it’s going to last. Copyright can be a dastardly thing, after all. To be filed under Too Good To Be True, the Internet Archive has posted up FREE scans of a massive number of Dragon magazine print issues and then some.

Did I mention free? Not only are all the print issues there for download, but also a scattering of some of the later digital issues that don’t appear to be free on the Wizards of the Coast website. Strange.

So is this digital archive legit? The reality is yes — you can go there and snag a PDF, Kindle, EPUB, Daisy, etc of Dragon issue #1 right now — but the legality is still up for debate, only because there’s not been any formal announcement or authorization from either Wizards of the Coast (who owns the D&D intellectual property) or Paizo Publishing, who produced both Dragon and Dungeon magazines for a long time and still sells print copies. Early in 4th Edition’s lifespan, Wizards sold PDFs of their rulebooks, but they freaked out and yanked them all at the first sign of real piracy.

Still, given the gamer Renaissance we seem to be in — with a new D&D “iteration” on the way and nearly all the old books becoming available to satisfy the grognards — perhaps this is for real. If so, it’s wonderful. As a longtime gamer, D&D fanatic, and even writer of some Dragon articles (in its digital incarnation), this is nerdgasmically fan-diddly-tastic.

Dragon isn’t the sort of magazine that you flip through, read a few choice articles from, and then toss. You hold onto every copy you own and take pains to keep them in relatively good condition. Each issue is a mini-sourcebook of D&D ideas, adventures, stories, and new rules you can toss into your game. Whether you’re a player or a DM, there is always something you can find and use in any issue. And no, not all issues are created equal.

The first issue of Dragon roared out of its cave in 1976 and made it to issue #357 before Wizards of the Coast reclaimed the license and reinvented the magazine as part of D&D Insider (along with its little brother, Dungeon) — a move that outraged legions of fans and still draws complaints on RPG forums. In fact, Dragon content has slowed down in the last couple of years, leading many to wonder what the next announcement’s going to be.