Get Your Orc On in the Next Dungeon Command Game “Let’s hunt some orc”? No, no — be an orc! Tomorrow is the release of the next installment of the Dungeon Command board game. Blood of Gruumsh gives you command of a war band of marauding orcs, allowing you to at long last call in the ogre and crack some human, goblin, or drow heads. Find out what’s so good about this game, and why it’s still Dungeons & Dragons but not really.

First of all, this isn’t Dungeons & Dragons the role-playing game — not that there’s anything wrong with that. There’s no adventuring or riddling with tricksy NPCs. There’s just lots of fighting and some rather slick pre-painted plastic minis. Dungeon Command is a skirmish-style, miniatures-based war game produced by Wizards of the Coast, which pits your merry band of heroes or monsters against your opponent’s. It scratches that itch for fighting iconic D&D monsters without requiring the time and effort needed to create characters or scare up a Dungeon Master.

The game straddles the line between traditional dungeon combat and Magic: The Gathering mechanics. The most surprising part of the game is that it leaves very little to chance. There’s no dice rolling at all — crazy! — only the random element of drawing from a limited number of cards. With your choice of monsters to deploy (Creature cards) and strategic attacks and defenses (Order cards), the way a battle plays out depends almost entirely on how you read your opponent and what you’re willing to risk.

This was the original game trailer.

Dungeon Command debuted early in 2012 but the last release was in July. It’s been too long, and fans have been restless for more war bands to choose from. Blood of Gruumsh is the fourth. The first three:

Not only do you control a boar, a wereboar, and orcs galore, the Blood of Gruumsh box gives you an owlbear. I’ll probably buy this just for the miniature alone, because owlbear!

So who’s Gruumsh, anyway? Why, the One-Eyed God, the brutal deity of all orcs, of course! I actually know a thing or two about old One-Eye outside the scope of this board game. He’s been a part of the D&D universe since 1980’s Deities & Demigods. 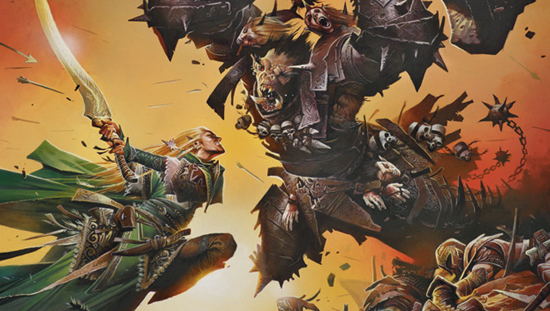 Just don't say anything about the missing eye. He's a little touchy about it. On an unrelated note, he hates those pansy elves.