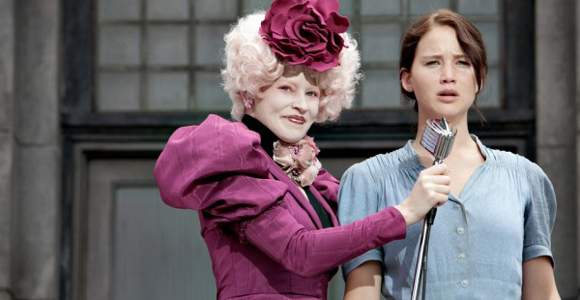 A few weeks back, a nail polish collection based on Suzanne Collins‘ film adaptation of The Hunger Games was announced by a beauty product company and then promptly denied by Lionsgate Films. A lawsuit followed but it seems as if everything has been cleared up because the collection is now officially set to be released. With a few minor changes. [STORY UPDATED WITH THE OFFICIAL PALATE BELOW]

The lawsuit was actually against Lionsgate believe it or not. The story was, they were being sued by American International Industries for breaking a contract. They claimed they “closed a deal in late October to create a Hunger Games-branded version of its ‘China Glaze’ nail polish, as well as contribute to the promotional campaign for the adaptation of the popular Suzanne Collins novel that Lionsgate is hoping will be a mega-blockbuster movie series similar to Twilight.” They were asking for $10 million because they had already started to produce the collection.

But with a new press release comes the news that Lionsgate and AII have seemingly settled their differences.

In keeping with the powerful themes and messages of the story, the collection of nail polish will be inspired exclusively by one of the book’s distinct settings—the Capitol of the nation of Panem. Awash in lavish fashion, food, and entertainment, Capitol citizens enjoy extreme cosmetics and body modifications, bold wigs, and outlandish costumes.

The big change of course being that there will not be colors based on District 12 and the collection will stick with the more appropriate Capitol segment of the book/film. The colors above are being scrapped and new ones will be revealed soon.

So, it may have had a hiccup but for good reason. Lionsgate wanted to represent their film accurately and not just sell nail polish for selling nail polish’s sake. The same can’t be said for a lot of product tie-ins these days. Now it’s more appropriate to the themes of the movie and should calm the anger some fans had at the mere idea of it. The collection will be available in stores on March 1, 2012, just a few weeks before the film itself on March 23.

UPDATE: Natalie Zutter from Crushable stopped by to let us in on a bit more news. Lionsgate and AII actually kept the colors from the original collection but changed all the names. Here’s the new fancy shot of the palate: 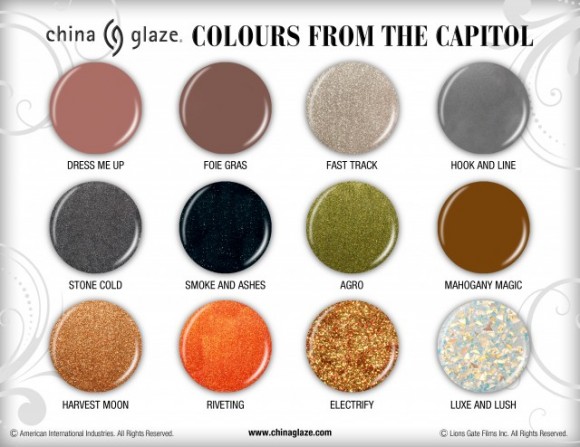 Well, a lot of you were hoping they’d keep some of the colors so this is good news. The bad news, they now have completely boring names. Some of the old ones were a bit much but at least they were a bit more obvious. As Natalie said, not much inspiration here. Interesting fact though, someone has placed each color with one of the Districts. Head to the Hob to see the correlation.