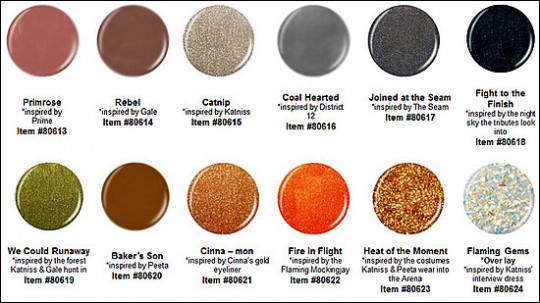 I thought producing a line of Hunger Games nail polish to coincide with the film adaptation of the Suzanne Collins book series was actually a pretty genius idea. Sure, you aren’t worried about what your nails look like when you’re fighting in the wilderness for your life, but the Capitol sure does and that’s why I thought it was the perfect promotional match. But apparently Lionsgate, who are producing the film, did not, and now the beauty product company who was creating the nail polish with them are suing the studio for terminating their contract.

The Hollywood Reporter has the exclusive. According to them, American International Industries, “filed a lawsuit Wednesday in LA Superior Court. The company claims that it closed a deal in late October to create a Hunger Games-branded version of its ‘China Glaze’ nail polish, as well as contribute to the promotional campaign for the adaptation of the popular Suzanne Collins novel that Lionsgate is hoping will be a mega-blockbuster movie series similar to Twilight.”

Now according to the complaint, shortly after the news of the collection hit the internet, Lionsgate reached out to the press to tell them the deal was “not happening.” Indeed, The Mary Sue heard from a PR firm who told us the polish line had “not been confirmed.” THR says the studio “asked American to say that the parties ‘were merely ‘discussing’ a ‘possible’ promotional deal.’ American says it refused to lie, prompting a Lionsgate attorney to send an email on Nov. 17 saying that the studio was ‘terminating’ the contract.”

“However, the contract does not permit Lionsgate to unilaterally terminate,” argues the complaint, a copy of which was obtained by THR. “Lionsgate attempted to justify its actions by claiming that American had supposedly ‘leaked’ information about the contract to the press. The claim was and is completely untrue–American did not ‘leak’ any information, and so informed Lionsgate immediately.”

American is seeking $10 million for the materials they’ve already purchased, time and labor. So far, Lionsgate has not responded with a statement.

The nail polish line had mixed reaction from fans, many of whom thought the idea was just plain ridiculous. Regardless, with the rabid fan-base of the book series, it stood to make a great deal of money.