The Hobbit: There and Back Again Release Date Gets Pushed 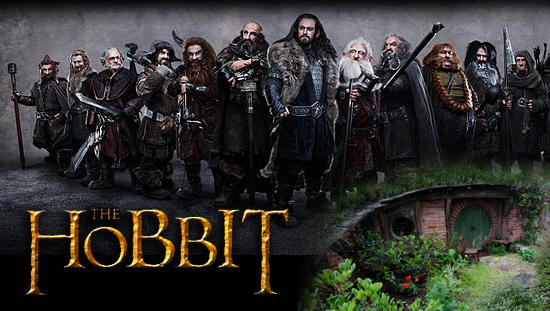 Films that take place in Middle-earth should always debut in December. This is a tradition. One does not simply release such a film in July (as originally intended) as idly as one might walk into Mordor. Sean Bean would have none of that. Which is probably why New Line Cinema has announced that the release date for the final film in Peter Jackson’s latest (prequel) trilogy has been changed. The Hobbit: There And Back Again will now hit theaters on December 17, 2014.

Peter Jackson’s decision to split the story of The Hobbit and other “prequel” events into a trilogy sure pissed off a lot of people when it was announced last July — I daresay it even perturbed some at Geekosystem — but none of those people were me. I, for one, was delighted at the news, because I intrinsically want more cinematic time in Middle-earth, period (those extended Rings DVDs are all too short), but I do think that Jackson’s PR could have been handled better. It was all so misleading.

See, by naming the movie, which became two, then three, under the umbrella of The Hobbit, everyone simply expected an adaptation of J.R.R. Tolkien‘s 1937 children’s book. Which they totally aren’t. They’re The Hobbit and then some. Old John Ronald Reuel himself later amended The Hobbit to better synchronize, if only minimally, with his Rings trilogy because by themselves the connections were lacking. Middle-earth in The Lord of the Rings is a larger place, and its inhabitants less whimsical.

This is why Peter Jackson had much more than the story of The Hobbit in mind. There’s a lot of extant Middle-earth lore that explains what happened between the day Gandalf arrived on Bilbo’s doorstep to recruit him for adventure (in the Second Age, year 2941) and the day that Bilbo and his nephew Frodo celebrated their joint birthday at the beginning of The Fellowship of the Ring (in 3001). What was Saruman up to? Where were the Nazgûl, and Sauron himself? There are so many questions that hardcore Tolkien fans already know the answers to, but the movie fans don’t and maybe ought to. Maybe? (Some clearly aren’t interested.)

Here’s just one example: In the anthology Unfinished Tales (written by Tolkien but completed by his son), there’s a short story called “The Quest of Erebor,” which takes place after the One Ring has been destroyed. In it, Gandalf explains to his halfling friends why he chose Bilbo for the quest against Smaug, why he thought Smaug needed ousting in the first place, and how he’d found Thorin’s own father in the dungeons of Dol Guldur years before — and that’s where he’d acquired that nifty backdoor key we see in The Hobbit: An Unexpected Journey.

Ahh, but Jackson’s version of the story messes with locations and the timeline more than a little, and that’s where I do get annoyed. In the movie, Gandalf is shocked by what Radagast is telling him about the old fortress in Mirkwood; in the books, he already knew about all that because he’d been there. Still, I understand the reasons for Jackson’s meddling, even if I don’t agree with the execution. End minor rant. I still love the films.

The first Hobbit film came out this past December (2012), with — unsurprisingly — polarizing reviews from critics and fans. The second film, The Hobbit: The Desolation of Smaug, will release next December (2013), and now There And Back Again the following December (2014). There’s plenty of time still for us all to anticipate, complain, or rave happily. 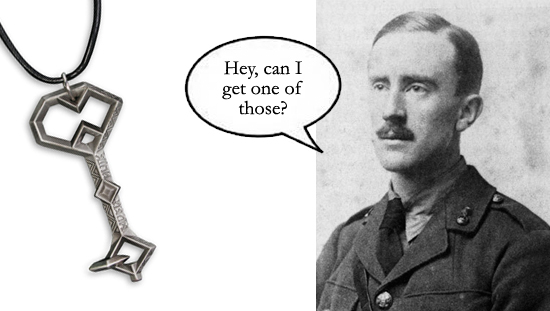 Actually, I think J.R.R. would still be annoyed at all the hippies who like his books. Nor would he likely approve of the fact that I own a Sword of Thorin envelope opener.