Physics Lets Us Know How Many Fish Gollum Needs to Live, We Now Sleep Easier at Night 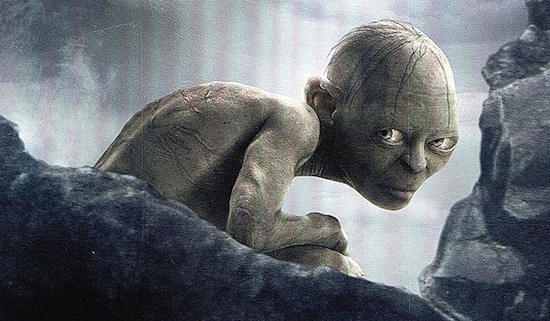 One of the great pastimes of geekdom is adding some degree of factual feasibility to works of fantasy in all its forms. With the release of The Hobbit this Friday, audiences everywhere will be reunited with a much younger, more energetic Gollum than the one they’ve come to know in The Lord of the Rings trilogy. But a haunting question that fans have tried to wrap their heads around for years is how has Gollum managed to be so long lived in spite of the fact he dwelled within the perpetual darkness of the Misty Mountains, dining purely on fish. Using assumptions on Hobbit physiology and his working knowledge of Gollum’s subterranean home, Rhett Allain — an associate professor of physics at the Southeastern Louisiana University — has crunched the numbers and deduced how many fish the little guy needs to eat to function. The number may shock you — if you actually care about this sort of thing, of course.

Allain observed that, based on Gollum’s surroundings,  the pitiable creature would need to be eating enough fish to maintain a constant body temperature higher than that of his dank dwelling — wearing nothing but a tenuous modesty cloth will do that to you — as well as provide the energy needed to attack wayward goblins and tricksey, fat hobbits. Allain said:

However, he also needs energy to keep his body temperature up to some reasonable amount. We all need to do this. However, Gollum is in an underground environment that is typically at some constant (and cold) temperature. If he doesn’t eat, his body would eventually reach the same temperature as the stuff around him. I assume this would be bad.

Taking into consideration values such as the cave’s overall temperature, Gollum’s mass, his heat capacity, as well as interactions — heat conduction, bodily evaporation, and energy radiation — that contribute to the gradual loss of thermal energy, Allain had broken it all down to this simple formula:

Ultimately, Gollum has to eat approximately 4.7 fish per day if he hopes to live and see his precious ring another morning. But, Allain’s credibility aside, we personally can’t attest to the accuracy of this formula. For one thing, he never took into consideration that before his dark transmutation, Gollum was a Stoorish hobbit known to be broader in size compared to the likes of Bilbo or Frodo. For all we know, the expert’s numbers could be way off.

(Wired via Blastr, image via miss_rogue)