Gizmodo Gets an Unlikely Ally in iPhone-gate: Jon Stewart [Video] 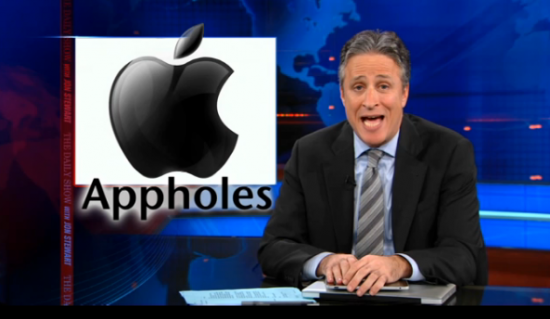 The spat between Gizmodo and Apple over Gizmodo’s mysterious acquisition of an iPhone 4G months before its release — which most lately culminated in a crack force of Apple-advised police raiding Giz editor Jason Chen‘s home and Gizmodo considering suing the police right back — has proven to be an endlessly engrossing spectacle for the techies out there, with many, like Daring Fireball’s John Gruber, saying Gizmodo and its publisher Gawker Media broke the law and basically deserve whatever they have coming at them.

Well, last night, Gizmodo got a high-profile supporter for the crowd who have no idea who John Gruber is: Jon Stewart. But he didn’t exactly fight the good fight:

Stewart’s argument against Apple largely consisted of 1) calling them “Appholes,” 2) referring to Apple’s classic 1984 ads and saying “Apple you guys were the rebels man, the underdogs. People believed in you. But now, are you becoming The Man? Remember back in 1984, you had those awesome ads about overthrowing Big Brother? Look in the mirror, man!” and 3) making various app and i- prefix related jokes. (LOL @iTaser — which only runs on Apple’s electricity, hehe.)

It’s not that Apple doesn’t deserve a drubbing for some of its presumptions — and we recognize that license agreement restrictions on compilers don’t make for the best television. But even if Apple did advise the police who took Chen’s stuff, Apple ≠ the police, and there’s enough legal and ethical ambiguity in Giz vs. Apple that “be cool, man” hardly seems a satisfying or useful response.