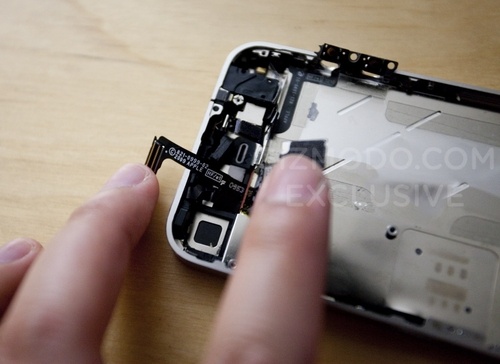 If this is real — as it very much looks to be — Gizmodo has gotten themselves a monster of a scoop: After taking some flak this past weekend for not covering Engadget’s pics of a rumored iPhone 4G, at 10:00 this morning, Giz surfaced with an insanely detailed post featuring 25 pictures, 3 videos, and scads of analysis of what they say, with an air of definitiveness, is Apple’s next iPhone. (While the “4G” name for the iPhone has yet to be confirmed, we’re sticking with it as the commonly used name for the highly anticipated new phone.)

A few of the purported new features: Front-facing camera for video chat, camera flash, higher-resolution display, and — in what might sound like a boring, wonky detail, but is actually the most important — Giz’s phone has a micro-SIM rather than a standard SIM card, which pegs it as a creature of the next generation. The battery is also larger, the edges are squared off, and the industrial design in some respects seems a marked departure from past Apple creations, although Gizmodo’s Jesus Diaz argues that there’s rhyme and reason to them after all.

The burning question in the minds of most tech geeks: How did Gizmodo get their hands on what’s probably the most-desired unreleased gadget? Giz is vague: “You are looking at Apple’s next iPhone. It was found lost in a bar in Redwood City, camouflaged to look like an iPhone 3GS. We got it. We disassembled it. It’s the real thing.”

Two possibilities: One, Apple directly or indirectly put the iPhone into Gizmodo’s hands to take the attention back from other new releases that’d been getting press, such as the HTC Incredible and Microsoft’s Kin phones. If so, this would be a pretty huge scoop for Apple to hand Gizmodo on a platter, especially in light of some of the site’s past stories which have not exactly treated Apple with kid gloves. For instance: photographing Steve Jobs and Eric Schmidt’s meetup at a cafe, and then getting a body language expert to analyze the awkwardness of the encounter. Also, while Gizmodo undeniably has reach, there are plenty of other big sites that’d kill for such a scoop, most notably their Spy vs. Spy-like tech rival Engadget, to say nothing of more traditional outlets like PC Mag and Wired’s Gadget Lab.

Possibility two: Someone really found the iPhone 4G at a bar where it had genuinely been lost and handed it over to Gizmodo. If this is the case, there’s a very good chance money was involved — possibly a lot. Gizmodo’s overlords at Gawker Media have no qualms about paying for big scoops, and in January, their sister site Valleywag offered $100,000 for a leaked Apple tablet. (They didn’t get it.) Though the anticipation factor may not be as high, getting an honest-to-goodness iPhone 4G months before any official announcement has to be worth at least as much as getting a tablet a few weeks before one. Of course, their source could’ve just been an Engadget hater. For what it’s worth, an unverified Twitter account that identifies itself as belonging to Apple’s chief industrial designer Jonathan Ive just Tweeted out “this isn’t good.” (h/t Rosa.)

Update: Daring Fireball’s John Gruber, who’s known to be well-connected with Apple, writes that Apple believes the iPhone was “stolen,” not lost. “Note that I did not use the word “lost”. It is my understanding that Apple considers this unit stolen, not lost. And as for the “someone(s)” who “found” it, I believe it is disingenuous for Gizmodo to play coy, as though they don’t know who the someones are.”

Also, according to Pocket-lint, rumors among journalists suggest that Gizmodo payed upwards of $10,000 for the device.

Update2: More murmurings from The Next Web’s Zee M. Kane: “Seems the “finder” of the phone has been shopping the device around and Gizmodo purchased the phone from them a week ago.”

Update3: Giz has posted their full account of what happened, and it’s a doozy. They also out an unfortunate Apple employee as the one who lost the phone.

Though its ethics are debatable, it’s a remarkable scoop and will likely be talked about for quite some time now, and no third-party analysis can really do justice to the wealth of information it puts on the table. Read Giz’s iPhone scoop right here.