Final Fantasy: All the Bravest's All Colors and Noise | The Mary Sue

Final Fantasy: All the Bravest’s All Colors and Noise, Hard to Say What Else 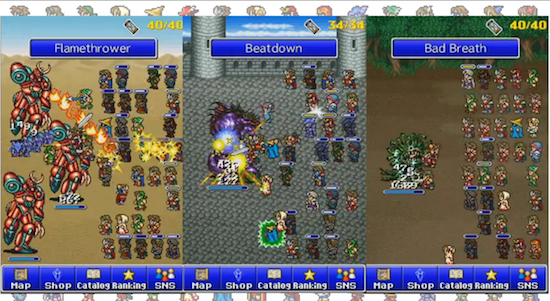 Though we certainly can’t get enough of them, video games like the Final Fantasy series aren’t for everybody — some people just don’t appreciate the obsessive micromanaging that comes with the territory. Probably influenced by the closed-minded few that feel RPGs tediously plod along, Square Enix has just released Final Fantasy: All the Bravest for iOS devices everywhere: A game that brings everything you loved about the 16-bit generation of Final Fantasy games, but pumps it full of near lethal amounts of caffeine and amphetamines.

In Final Fantasy: All the Bravest, random enemy encounters are no longer a tedious back-and-forth of attacks, but rather hair-trigger battles thanks to the hastened Active Time Battle system — a series trademark since its heyday in the ’90s. Controlling parties, though legions would be a more appropriate term given the sheer number of characters, consisting of 16 warriors or more, players lay a fast-paced beating on the opposition by tapping members of their party once their ATB gauges are filled. From there folks can delightfully watch as enemies are annihilated in a whirlwind of magic spells and special attacks.

It’s a short game, granted, but Square Enix has provided plenty of additional purchasable content to heighten the bombardment of visual and auditory stimulation, of which includes extra characters to fight alongside your party hailing from various games in the series — such as Final Fantasy VII’s spiky haired sourpuss Cloud Strife.

Final Fantasy: All the Bravest is available right now on iTunes, so if you have spare cash burning a hole in your pocket, you could always spend it there. It’s worth noting that Penny Arcade’s described the game as “a steaming pile of in-app purchasing horseshit,” so, your mileage may vary.