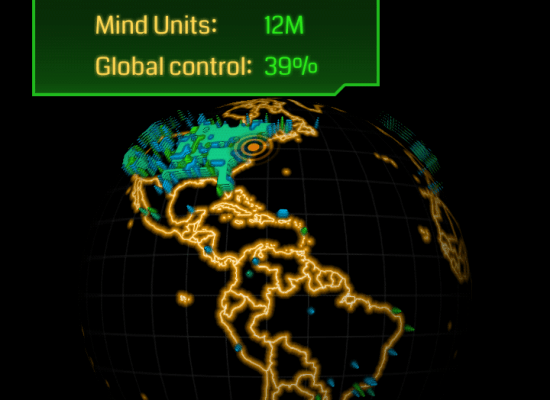 “I’ve been trying to take over Washington Square Park for a little over a week now, but it’s overrun with Resistance portals, and I’m not powerful enough to shut them down,” is something a crazy person, or someone playing Ingress would say. I wrote about the trailer for Ingress back in November. It’s Google’s Android augmented reality MMORPG. The game is still in closed beta, but I got an invite a little bit ago and I’ve been trying it out. I really have been trying to take over Washington Square Park. It will be mine, I tell you. Mine!

Ingress is centered around a war between two factions, the Enlightened and the Resistance, over what to do with a new energy discovered in the world. When you register you have to pick a side based solely on the brief descriptions given of the two sides in the game.

The description in the Google Play Store reads:

“The Enlightened” seek to embrace the power that this energy may bestow upon us.

“The Resistance” struggle to defend, and protect what’s left of our humanity.

When I started playing, the tutorial seemed to be nudging me towards the Resistance, but I went with the Enlightened because I asked myself what I would actually do if science discovered a new kind of energy, and decided I’d embrace it. I spent more time thinking about it than I probably should have, but you could just decide whether you want to be blue (Resistance) or green (Enlightened) and pick that way. It doesn’t seem to matter much which side you’re on, except that the Resistance are the worst.

In my post about the game’s trailer I mentioned other augmented reality games like Shadow Cities for the iPhone, which I’ve played. They’re similar, but Google really pushes the real-world aspect of this game. Unlike Shadow Cities which allows players to teleport and jump around the virtual world, letting them play without physically moving, if you want to move in Ingress you have to move in the real world, and you have to keep moving.

Gameplay focuses on hacking portals on the augmented reality map. They’re largely centered around public art and parks, and they’re fixed points in the game. Players use items called “resonators” to claim a portal for their team and protect it from the enemy. To take control of a portal, players have to use their energy to destroy all the enemy resonators and put up ones of their own. 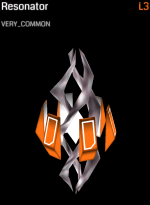 Users can send in photos of locations they think should be included in the game as a portal to Google, but there are no guarantees they’ll be added. Basically what that means is that you’re a lot more likely to find portals in a city like New York than a quiet New Jersey suburb.

There are no portals near my home, but there are loads of them close to the office here at Geekosystem, so most of the time I’ve logged in the game has been on my walk between work and the PATH station. This is when I realized the fatal flaw of a game where you have to physically move around in the real world: The morning I started playing Ingress it was 19 degrees outside. One is less inclined to hack enemy portals when it’s below freezing. Although, having stuck with it for a week, the adverse weather conditions do kind of raise the stakes a little bit.

Since I’ve been mostly playing while walking to or from work, I hit enemy portals while on the move and don’t stay in one place. It’s convenient, and I managed to get a decent amount of experience relative to time played, but it’s tough to really take out enemy territory with such guerrilla tactics, so the other morning I spent about an hour playing in Washington Square Park. The park has loads of portals so I figured it would be a good place to try to focus on taking over some enemy ones.

Turns out that even in a place with a dozen or so portals within two blocks, it is difficult to play without being constantly on the move. After a portal is hacked it has a cool down period before it can be hacked again. This starts at five minutes, and the game told me it goes up over time. I didn’t notice any significant increase in cool down periods in the time I played, but one portal did “burn out” and give me an error message that said Google would have to reset it. 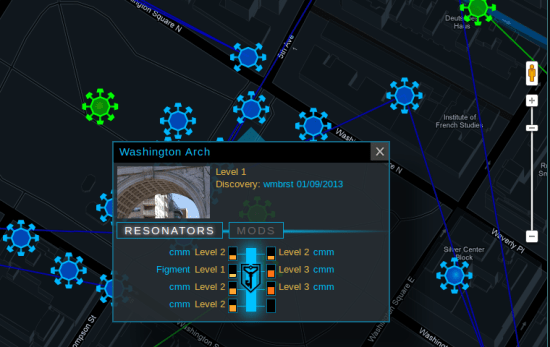 Take that, Resistance. I burned out your portal.

Hacking an enemy portal makes you lose energy, which you replenish by collecting more. To do that, you have to walk around. The energy shows up as little white dots on the map. It’s plentiful, but you have to physically go get it by walking around with the game open on your phone.

In the hour I spent in the park today, I walked around it and the neighboring blocks many times. Ingress can get pretty tiring, and not just for you, but also for your phone. Ingress is really hard on the battery life of my Galaxy S III, and that makes sense. It uses a lot of the phone’s resources. Players are using their data connection, their screen, their GPS, and listening to This American Life while they play. That last one might just be me, but I really didn’t care for the in-game music so I needed something else to listen to.

Players can meet up to join forces against their common enemy, but every time I tried to rally other members of the Enlightened to take over Washington Square Park, no one wanted to play with me. I tried to not let it hurt my feelings by telling myself it would probably be easier to get a team together once the game is out of beta and more people are playing it.

If I didn’t know I was writing this review of the game, I probably would have stopped playing Ingress after my first try. I didn’t really get it, but it’s grown on me a bit. There’s nothing really in the game to grab you and make you want to keep playing. You have to sort of hook yourself. Google tries to make it interesting with The Niantic Project, a website tied into the game with pictures, documents, and video clips that have to do with the overall story of the game, but even having played it for over a week I’m not really sure what the story is about, so none of that is particularly interesting to me.

I’ve asked other players what drives them to keep playing, and user RedJava said, “For me it’s simple, it’s territorial and it’s teamwork.”

I haven’t experienced much of the teamwork aspect, but I agree about the territoriality of the game, even if it is arbitrary. I’ve decided I want to control Washington Square Park because it’s near my office and I like passing through it on my walk to and from work. There’s no real advantage to it. I’ve just set a goal and convinced myself that I can’t let the blue team win.

My recommendation for getting the maximum fun out of this game is to pick a place and convince yourself that it’s very important that the other team doesn’t control it. It isn’t, but if you tell yourself it’s important enough times, you start to believe it. Your enjoyment will also probably hinge on how much you like walking around. I happen to love walking around the city, and have already found myself going pretty far out of my way to attack an enemy portal, so I’m finding myself enjoying the game the more I play it.

Ingress could also be a good way to get to know a new city or neighborhood. Instead of walking around aimlessly, you’ll be walking around with a purpose — an arbitrary purpose based on controlling a type of energy that doesn’t exist, sure, but it’s still a purpose. Who knows what you’ll find. The other day I found a vintage clothing store I’ll probably check out on my walk home at some point.

The biggest disappointment I had with Ingress is the lack of real augmented reality. There’s the in-game map showing where portals and energy are located, and when you hack most of the portals they have a photo attached to them and sometimes a blurb about the art or building they’re based around, but that’s it. The trailer made it look like there’d be cool portal graphics as overlays in the camera’s view, but that’s not in there.

That could be because battery life is already a problem with this game, and bringing the camera into the mix would only drain it faster, but it would be a nice option to have, especially because the map view can be a little disorienting. You see streets, but they’re unmarked, and the compass doesn’t always work that well.

The game is still in beta, so features like that could be coming in the full version or future releases, but the game could certainly benefit from more AR integration. I just want my life to look more like this incredibly slick trailer Google released for Ingress:

Ingress is a decent game as long as you don’t mind having to move around to play a video game, which really is something that might make a lot of people write it off. It handles pretty well on my Galaxy S III, but I’d really love to try it on Google Glass.

If you want to try the game for yourself you can request an invite through Ingress.com.