Hide Yo Kids, Hide Yo Wife, Fake Eagles Snatchin’ Everybody Out Here 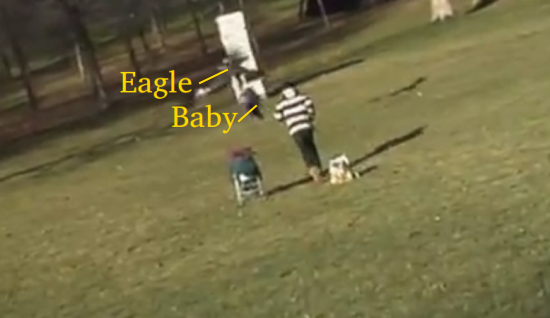 Death from the skies! There’s a video on YouTube right now that allegedly shows a golden eagle swooping down in a park and attempting to carry off a small child. Golden eagles are one of the largest birds in North America, but could one actually lift a baby? Nope. They can’t. There were few things about this video that made us suspicious, and with good reason. It turns out it was fake after all.

The video was done by Normand Archambault, Loïc Mireault and Félix Marquis-Poulin, students in 3D Animation and Digital Design at Centre NAD in Montreal for one of their classes. The same course was responsible for a popular hoax video of an escaped penguin wandering Montreal.

We were prepared to call the video a hoax this morning, but didn’t run the story before we found this post on the Centre NAD website confirming our suspicions. Still though, it’d be a shame to waste all that quality debunking, so here’s how we knew it wasn’t real.

The video is titled “Golden Eagle Snatches Kid.” Golden eagles can have a wingspan up to seven and a half feet, and weigh as much as thirteen pounds, says the Internet Center for Wildlife Data Management, a joint effort by several American universities. The same report estimates the maximum weight that a golden eagle can carry to be six or seven pounds.

It’s hard to gain a lot of detail from the short, low-quality video, but we can tell the child is sitting up without assistance, which would put the youngest age estimate around six months. That’s the age when a child can sit up on their own, says TheBump.com. By the outfit, we’ll also assume it’s a boy. The median weight for a six month old boy is 17 1/2 lbs according to Livestrong.com.

That puts the weight of the child at least double that of the maximum weight the bird can carry. We even had Riley Woodford, Information Officer for the Division of Wildlife Conservation in Alaska look at the footage, and he agreed with us, saying:

I watched it four or five times. You’re right about the weight issue, that’s the first red flag. The second is that the bird was being videoed before the snatch – pretty serendipitous. The third is the red-tail hawk scream dubbed in.

Good effort though, students. The video already has over 5,000,000 views on YouTube.

If we’ve learned anything from this, it’s that if you see a crazy animal video set in Montreal, it’s probably fake. We also learned a lot about eagles, and also babies.

Check out the video below:

The only way that eagle could have carried that baby is if Gandalf himself summoned it to do so.