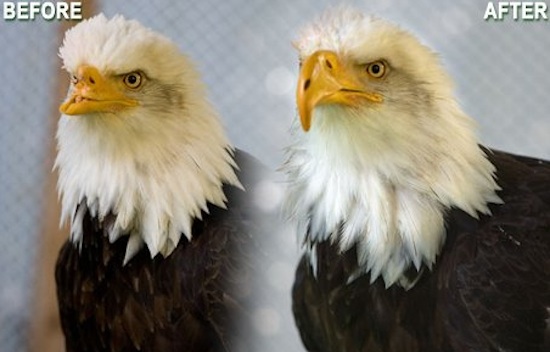 “What do you get the bald eagle who has everything?” Probably a rotting fish or something. They love that kind of thing. It’s pretty obvious that you get a bald eagle with a mangled beak that prevents it from eating and cleaning itself a new beak, though. That’s certainly no small task, but it’s one the folks at raptor sanctuary Birds of Prey Northwest have officially risen to, using a 3D printer to craft a brand new beak for Beauty, a disabled bald eagle who has been in the sanctuary’s care since she was shot in the face by a poacher in 2005.

Working with a team of engineers, and one dentist who probably will never do anything weirder, the folks at Birds of Prey Northwest crafted a new beak for Beauty from nylon polymer, and managed to attach it to their remnants of her own beak, giving the eagle a mostly functional face once again. Now she pretty much looks like she should have in the first place.

The beak isn’t a total solution to Beauty’s troubles, though. It’s not stable enough for her to leave the care of Birds of Prey Northwest and return to the wild. The beak is by no means just for looks, however.. Thanks to the first of its kind prosthetic, Beauty is now able to eat, preen and groom herself, which is a pretty key part of your day if you’re a bald eagle. At that point, you’re just down to sitting in trees, and soaring majestically over things, which we have to assume gets a touch boring once in a while.

(via Grist, image courtesy of Birds of Prey Northwest)