Squirrels Teach Robots To Lie, Nobody Questions Whether That’s A Good Idea 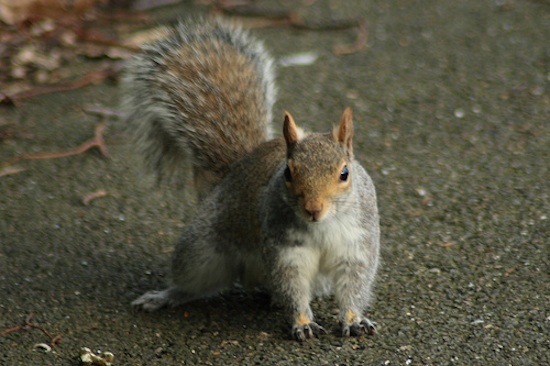 Disappointed that your Roomba can’t clean your house while also telling you that you that shirt your girlfriend hates looks great on you? Researchers at Georgia Tech are working hard to solve that problem by teaching robots to lie, and they’re taking lessons in lying from some of nature’s most deceptive animals — squirrels. Because hey, what could possibly go wrong with that plan, which you can see in action below?

Deception is not something that comes very naturally to today’s artificial intelligence programs. For most robots, it’s hard enough to navigate the world the way it is without introducing fantasies about the way it’s not into the equation. So to help robots get the hang of misleading others, the team has turned to the squirrel, or “forest liar,” to give robots the tools they need to learn the subtle arts of deception.

Mimicking biology is nothing new for robots, as robotic designs of late are often inspired by nature. Rather than imitate the structure of a squirrel, though, which is less than ideal unless you need a robot that can get into any bird feeder ever forged by man, the Georgia Tech team is looking to take cues from squirrel behavior to show robots that it’s okay to lie sometimes — like telling another robot that its robot ass looks great in those robot jeans.

Deception is also a key skill to master for staying alive in hostile situations, though, and those are the skills the team is trying to instill in its robots. Perhaps nowhere is that instinct more finely honed than in squirrels, which are potential food for just about everything they will ever encounter in their often brief, twitchy lives and, to make matters worse, are constantly stealing food from one another. That also means, though, that they’re very good at hiding food from one another, a skill researchers want to instill in their robots.

The Georgia Tech team taught their mobile robots to mimic the behavior of squirrels storing food for the winter, picking up virtual food items and dropping them in caches. They also managed to teach the robots the equally valuable skill of bullshitting about where their caches are by visiting fake caches where no food is stored when other robots are around, and then changing the location of real caches once they’ve left. It may not sound like much, but for robots who will have to learn to get along in a world run (for now) by human beings, being able to lie — or at least not tell the whole truth — is a tactic they’ll need to master sooner than later. You can get a look at how skilled they’re getting at it in the video below.

While we’re not super comfortable with robots learning to deceive us, there are things we worry about more. As long as the robots don’t reciprocate by teaching their squirrel mentors how to shoot lasers, we should be okay. If, however, we’re faced with a future that includes both robots that can lie to you and squirrels that can vaporize you with a thought…man, we’re really just done. That’s a world in which the living will envy the dead.