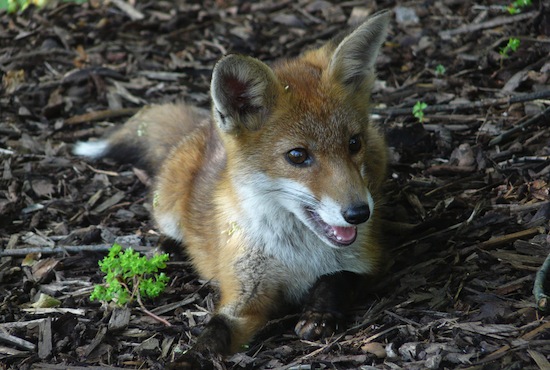 When a friend of 16-year-old Norwegian Lars Andreas Bjercke got a text message that read “Jlv In ø a0ab 34348tu åaugjoi zølbmosdji jsøg ijio sjiw,” he wondered why his pal would send such a random assortment of characters. Little did he know that the message was written by the fox that had stolen Bjercke’s cell phone. What was the fox trying to say? It might have been bragging about snatching the cell phone, or maybe asking for some delicious rabbits. Foxes love rabbits.

To attract a fox, Bjercke had installed an app on his phone that imitated the sounds rabbits make. We don’t know why he was trying to attract a fox, but we’re guessing it’s because they are so adorable.

After a few nights of seeing the fox circle his yard, Bjercke put the phone down and walked away. Lured by the sound of rabbits, the fox approached the phone tentatively at first, but soon grabbed the phone and made a run for it.

Bjercke tried to chase the critter, but because it was a fox, it got away. That’s kind of their thing. Having lost the fox, and his phone, Bjercke tried calling his own number in order to follow the ringing. That didn’t work because when Bjercke called his phone, the fox answered. He could hear some crackling and noises, but the fox refused to give up its location.

Later, one of Bjercke’s friends received the cryptic text message “Jlv In ø a0ab 34348tu åaugjoi zølbmosdji jsøg ijio sjiw.” We tried running it through Google Translate, but there’s not Fox to English option, but our best guess is that it says “You up?”

The absolute best part about this story? It was caught on video. Adorable, adorable video.

(via LiveLeak, image via Loz Flowers)