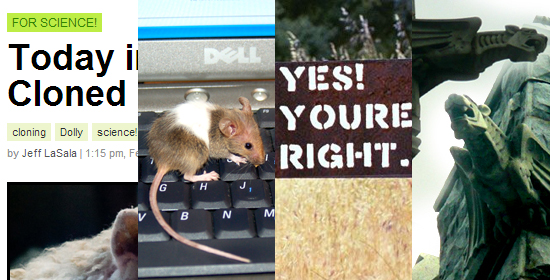 This week in Editors’ Picks: Rollin welcomes a new minion, Ian enjoys the way the world works, Glen gets arrogant, and newcomer Jeff promotes a creature.

As some of you may have noticed, we’ve had a new author floating around these parts. Steven departed at the end of January, and we put out the call for a new assistant editor to take his place. Many applied, but only one made it through all the hoops. That man is Jeff LaSala.

You’ll notice he has a penchant for all things fantasy and sci-fi, as well as board and role-playing games. Jeff’s pretty schooled in the ways of Dungeons & Dragons, for example, and even wrote a novel for Wizards of the Coast. In short: He knows his stuff.

Geekosystem, as always, is dedicated to growing to support all things geek, and Jeff should definitely help us appeal to the more entertainment-minded denizens of the Internet. He’s already churning out articles like a pro, and I’m sure he’ll only get better and better as time goes on.

We’ve talked before about the pest problems that have turned parts of Guam into a nightmarish hellscape ruled by slithering, tree-dwelling reptiles and legions of arachnids. Today, though, came news that the state of things in Guam is going to have to get worse before it gets better. How could an island ruled by overfed tree snakes and spiders who have no predators to fear, you may ask, not unreasonably?

Well, how about if it also started raining dead, poisonous mice?

No, seriously — that’s actually the latest plan to try and get Guam’s population of brown tree snakes under control. The invasive serpents have been the key to Guam’s ecological problems of late, dining with impunity on the island’s birds. With bird populations at an all time low, it’s been boom time for spiders lately, too. So the U.S. Department of Agriculture is upping it’s game, hoping to weed out a lot of the snakes with poison bait — airdrops of dead mice laced with lethal doses of painkillers.

The airdrops, which are scheduled to begin in March or April, will ideally send snake populations plummeting, offering birds a much needed respite where they can breed and raise their young without constantly being worried that they’re about to be eaten by a snake — which seriously just kills the mood every time in our experience. As to why airdrops are the preferred method of delivering the dead mice? Well, the jungles on Guam are basically made of spiderwebs right now, and I certainly wouldn’t go in there. Hell, I wouldn’t even fly over the place. And while this idea seems a little unlikely to be totally effective. It’s always good to see exterminators thinking outside of the box — even when what’s outside the box is a bunch of dead mice.

When I got married oh so many years ago I had an uncle try to give me some advice. “You can be happy, or you can be right,” he said. My uncle underestimates how much I love being right. It is the best feeling in the world. Being right is better than sex.

I’m not talking about just being right when my wife and I disagree on things. I mean being right about anything. It feels so good. There’s a confidence you get from being right, and knowing that you’re right that’s impossible to get anywhere else. It’s knowing you aced a test before you get your grade back, not because you think you knew the answers, but because you know you did.

It’s the confident pride you get when you don’t have to look up on IMDB whether it was Bill Paxton or Bill Pullman in Independence Day, because you know it was Bill Pullman. The feeling is so much better when you’re arguing it with someone because it means that not only are you right, but someone else is wrong.

I’m not always right, which just makes the times I am right that much sweeter. There’s a beautiful line in the Harvey Danger song “Pike St/Park Slope” that says, “Pomposity is when you always think you’re right. Arrogance is when you know.”

I think it’s a beautiful song. In fact, I know it is.

Because I’m a sucker for mythic creatures and things carved in stone. When I was a kid, my family was stationed in Belgium, and in the city of Mons, gargoyles leered down at me from old cathedrals. I was scared of them, and loved them for it. In West Point, NY, gargoyles perch on the battlements of the academic buildings. I’m good at spotting them wherever I go — throughout New York City, across the Hudson Valley, in rural Pennsylvania. They’re stone sentinels carried over from an older time. I’m not particularly superstitious, but it brightens my day whenever I see one. In the very least, they’re elegant weather rocks.

And those are just the real ones, the grotesques and ‘goyles hanging off buildings. The imaginary ones are even more fun. Tomorrow I’ll be running an introductory Dungeons & Dragons game for a group of adults who know geek culture but have never actually played the game before. And in the adventure I’ve got planned, a cluster of fey-like gargoyles will ask the heroes some riddles — and try to tear them apart if they don’t guess correctly. Fun! In one of my more ambitious writing projects, I even invented a cyber-gargoyle bogeyman known across the world only as the Geist.

It’s hard to articulate what I like most about gargoyles. Their spiritual/sinister origins, their each-is-different-from-the-next versatility, their frozen bearing. Gargoyles are unchanging, and so much about life isn’t. Here at Geekosystem, everything’s new to me. But the gargoyles outside are still the same.