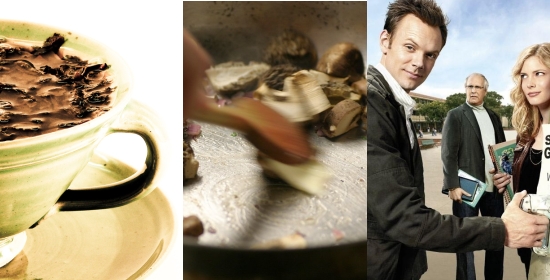 I’ve always loved iced tea. That’s just my Alabama roots coming out, but it’s true. My mother used to make it pretty much every single day, and the pitcher would be empty by the following evening. To say that I spent my life drinking iced tea would not be an inaccurate way of putting things.

It wasn’t until I met my lady that I started to enjoy hot tea. Earl Grey and all that had never touched my lips. I’d done the occasional holiday herbal tea, like a peppermint around Christmas, but the typical teas never made their way into my diet. I wasn’t sure what I’d think when I did.

Turns out, I love it. Teavana has become a frequent stop. I own more tea-related gear than I’d like to admit, and the beverage is currently battling coffee for my favorite thing to drink in the morning. That’s why my pick this week is tea. Stay thirsty, my friends.

As someone who is not particularly athletic, but is wildly competitive, I’ve had to find different outlets for my gladiatorial instincts. Over the years, these contests have ranged from the merely strange — highland games — to the bizarre and troubling — an ill-advised marshmallow Peeps-eating competition — but I think I’ve finally found my calling: Cook offs

Few things put me in a more zen place than cooking. Wherever I live, the kitchen is a refuge, a place of power for me. With a pot bubbling and a knife in hand, all seems right with the world. It’s a place where I’ve always felt in control, an island of peace and predictability in an otherwise insane world. And at the end, you get food!

The problem for me is you generally get too much food. I learned my trade in kitchens and on short order lines. Feeding a Super Bowl get together, birthday party, or small band of marauding Vikings is no problem for me. The art of cooking a meal for one, though, continues to elude me. Thus, I end up with pots full of leftovers, unless I go and feed them to strangers.

Cook offs, you see, take care of a pair of problems for me. They let me show off my not insubstantial culinary skills, and prevent me from being left with a gallon of chili or jambalaya that, even if it’s excellent, doesn’t bear eating every meal for a week. Everyone’s a winner.

Except me. You see, I have yet to make the winner’s circle at a cook off, but that just keeps me hungry, eager to tinker with old recipes, improve new ones, and test out new spices and techniques. We’ll see how it all pays off at this weekend’s chili cook off. Game on.

I was really excited yesterday about the premiere of the new season of Community, and I wasn’t subtle about. Every post I wrote for the site yesterday ended with a clip from the show. Thinking of which clips to use was easy since I’ve rewatched the first three seasons on Hulu in the last few weeks, so it was all pretty fresh in my mind.

A lot of people were worried about the show continuing without creator Dan Harmon, but the first episode of the season certainly seems to hold up.

The episode itself did a lot in terms of dispelling any worries viewers might have. It easily fit in with the tone of the last three seasons. Without giving too much away, they made a clever move covering Chevy Chase’s leaving the show before the season wrapped shooting, and the episode itself was about learning to deal with change.

Will Community be the same without Dan Harmon behind the wheel? No, but change can be good. I’m sure there will be a percentage of people who decide the show was better before, but I’m too happy the show is still on the air to be too critical.

It could be different, but I’m glad it’s back. I guess I just like liking things.