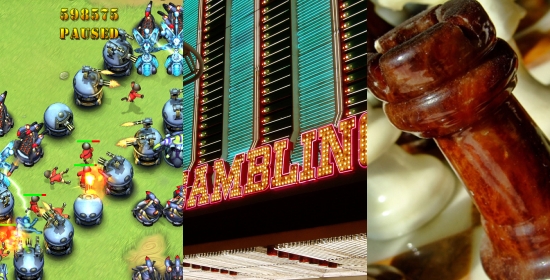 This week in Editors’ Picks: Rollin rediscovers an old favorite, Ian gives in to his vices, and Glen challenges his boss.

When I came home to Indiana for a visit, I decided to bring a smashing group of games that I wanted to explore on my Nintendo DS. Infinite Space, Shin Megami Tensei: Devil Survivor 2, and many more made the trip. As it turns out, it looks like maybe they shouldn’t have, as I never have time to boot the device up and devote a chunk of time to them.

Strangely, though, the downloadable title Fieldrunners has managed to receive a few moments of my time. In fact, I’ve been playing it every single night before bed, and I’m slowly remembering why I fell in love with the game in the first place. That, and Earthworm Jim, are the only two titles I ever downloaded with my DSi.

Tower defense is a genre I thought I’d outgrown — been there, done that — but there’s something about building the perfect labyrinth of killing machines that just viscerally satisfying. Even though I lose miserably more often than I win, the experience is a sort of zen one that I wouldn’t give up for any other game.

First off, it should be noted that I am watching this week’s Har-Bowl under the most vociferous of protests. As a Bears fan of a certain age, I still haven’t forgiven Jim Harbaugh for his time under center in Chicago during my childhood. Watching him play QB was a traumatic experience for a kid, not unlike having a person come into your home, murder everyone you love, and set the place ablaze as he leaves once a week for four months a year. Not that it’s gotten better since then — I’m looking at you, Cade McNown, you inhuman monster — but still, old wounds heal slowly. And the Ravens? Oh, man, don’t even get me started on the Ravens.

But of course I’m going to watch the Super Bowl this weekend, because duh, it’s the Super Bowl, and even if you can’t bring yourself to root for either team — indeed, even if you don’t know how many points are in a touchdown — you can still enjoy the game thanks to the miracle of gambling.

While getting a sports book is illegal in most parts of the country — a fact for which my kneecaps are grateful on a daily basis — you can still put together an easy pot on the game, even if people don’t have a clue what’s going on. The easiest way to get a little shrine to almighty Gamblor going in your house is filling out a Super Bowl Squares grid. The ten by ten sheet will let people start a pot to bet on the outcome of the game by guessing the last number in each team’s score.

Setting the price at a buck a square makes it easy to buy a couple of spaces, and means that even people with no interest in the game can buy a rooting interest, and the random nature of assigning scores to squares means their bet is just as good as everyone else’s. Superbowlsquares.org can provide you with the materials — if drawing a bunch of lines on a sheet of paper isn’t your thing — and walk you through the setup if it’s your first time.

And that’s just the straightforward way to gamble! We haven’t even gotten to side bets you can take with like-minded, gambling-problem-having friends, which range from the trivial — heads or tails on the coin flip — to the ludicrous — how many times will the word ‘Harbaugh’ be uttered during the game? — to classics like whether or not the 49ers, favored by three and a half points, will cover the spread.

Why stop at betting on just the game, though? Your Super Bowl party offers no end of fun side bets you can play with your friends. How many times will someone hijack the remote and turn on the Puppy Bowl, for example? Who will be driven to the bathroom by gallons of cheap domestic beer first? The over-under on how much pulled pork I will eat in the course of the day currently stands at three and a quarter pounds, and I’m taking all bets.

So remember, just because you’re not interested in the game — and I get that plenty of you aren’t, and I respect that, even if I personally happen to think it’s a bad life choice — there are still plenty of ways to take money from your friends, and probably do so while consuming one heck of a lot of good food. Which isn’t really so bad as far as ways to kill a Sunday go, is it?

About two weeks ago, Rollin told me he sent me a request in Chess With Friends. He also told me that because I didn’t respond to the request the game forfeited for me, and that means he won. That idea — like Rollin — is ridiculous.

My first impulse was to challenge him on the spot to a game, but then I remembered something — I am not very good at chess.

Look, I’m not terrible. I know it’s not a horse, but I’m not going to win any tournaments either. I win about as often as I lose when I play online, but most of the time when I win I’m pretty surprised. My online rating is a little above the average, but I’m far from confident that I’ll win if I challenge someone.

My favorite thing about chess isn’t even really playing a game against anyone, it’s solving tactics puzzles. They show a chessboard in the middle of a game, and you have to figure out what the best possible move is. It’s less about strategy than it is about solving puzzles, and I love to solve me some puzzles.

Since Rollin told me he thinks he beat me in chess (he did not) I’ve been playing a lot more to practice so that I can challenge him publicly and then hopefully win so I don’t look like a patzer.