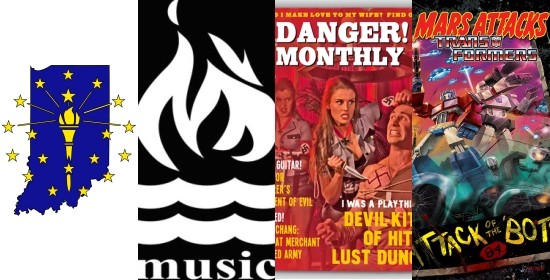 This week in Editors’ Picks: Rollin reminisces about home, Ian taps into his own nostalgia, Glen keeps watching television, and Steven picks up a strange one-shot.

I wasn’t born in Indiana, but I certainly was raised there. My town’s close enough to Kentucky to officially be part of the area people refer to as “Kentuckiana.” So, there’s that. Even so, I never crossed the bridge too much, and the majority of my time growing up was actually spent in the suburbs and hills of Indiana.

That’s pretty much where all my friends are, though I now live in the greater New York City area. That isn’t to say I haven’t made friends here, but six months doesn’t really compare to 25 years. I’m heading back soon for visit, and it’ll be my first time home since moving. I miss driving, which is amusing to me.

A lot of folks consider Indiana one of those states best left as a location during transit and not a destination. That’s fair. To me, though, it’ll always be home.

Whatever your musical taste, chances are there are bands you like, and there are bands you love, and those are both great kinds of bands. But for me, there has always been a class apart from these two and that’s bands you just get. Songs or albums that are always there for you, the tunes you put on when you know you need them — music that gets you through stuff. For me, that list has and I suspect always will be topped by bassy, raw-vocalled, balls-out rock of Hot Water Music.

Fuel For The Hate Game may have been the album I listened to most during the by turns boring and breathtakingly ugly years of high school. A drawn out breakup found Caution in my headphones pretty much all of the time for yeah, like months. My soundtrack to the home stretch of grad school? Forever and Counting, on repeat, at maximum volume.

These are all, for my money, utterly classic albums, and totally worth a listen if you’re not familiar with the band. And because the Internet is a thing now, you can listen to any of them on Spotify, along with Exister, the latest full length from the band, which has been an on-again, off-again affair for the last few years.

When they’re on, though, they’re on, and as of last night, I’m happy to report their live show is as fist-pumping and scream along as ever, and chances are they’re coming to a city reasonably near you in fairly short order. Check ’em out on this tour, because there’s no telling when the next chance you’ll get may be.

Look, an Australian TV show about World War II that’s set in the 1960’s and features a mind-controlled triceratops with guns tied to its horns might not be for everyone, but I sure love it. Danger 5 is great, but it’s incredibly hard to describe without it sounding completely bonkers.

Yes, World War II was over before the 1960’s. Yes, dinosaurs have been extinct for millions of years. Yes, mind control technology is still at least three years away. Yes, a guy with a giant eagle head probably wouldn’t be in charge of killing Hitler, but if you can get over all that, then you’ll love Danger 5. If you’re still not sure, here’s a trailer:

If that looks as awesome to you as it does to me, then get on board. Otherwise, get your entertainment elsewhere.

I’m only three episodes into the show, but it’s quickly becoming one of my favorite things in this world. The whole thing has the feel of a live-action Thunderbirds, but with a lot more drinking and sex. It’s about an international team of agents. There’s not a lot of back story. The action focuses mostly on defeating increasingly ridiculous enemies, and of course — trying to kill Hitler.

Danger 5 is available on Hulu, but if it were to be aired on American television, I think it would fit right in on Adult Swim. Go watch Danger 5.

And of course — Kill Hitler.

Red tape? Copyright issues? Those terms simply don’t exist in comic book publisher IDW’s lexicon, and if you’re an avid reader of the various titles they put out each week, then you know what I’m talking about. If not, a little explanation is in order: IDW has been granted the license to numerous memorable franchises — including Dungeons & Dragons, Teenage Mutant Ninja Turtles, and Godzilla — over the years to be turned into comic book series, treating them with the dignity and respect they deserve through excellent storytelling and artwork to match. Obvious kids at heart, IDW’s team editors sometimes have the characters from these disparate franchises come together in a major crossover events regardless of the fact that not all of them hail from the same licensor. In the past they’ve gone toe-to-toe with flesh-eating zombies and Cthulhu — yes, it happened — but 2013 has pitted them against the Martians from Mars Attacks.

This week I managed to pick up Mars Attacks the Transformers in addition to the other comics on my pull list, and, let me tell you, this is something that you can’t afford to miss! Right from the beginning it was palpable that the comic was not taking itself seriously and it even manages to poke fun at the absurdity of the original cartoon from the ’80s. Were you ever baffled by how Spike, the Autobot’s danger-prone human companion, was able to walk around bearing banana yellow boots without the slightest modicum of ridicule? So was the comic’s writer Shane McCarthy, who brought this fashion faux pas to light in a humorously sardonic way. Other hilarious highlights include Megatron being shrunk down to the size of a toy and Ironhide smacking fellow Autobot Cliffjumper upside the head with his own severed arm.

Mars Attacks the Transformers is a one-shot issue, meaning that the story is self-contained and can be read by anybody even if they don’t have prior knowledge of IDW’s Transformers continuity. For a quick laugh, buy a copy for yourself. It’s still on the shelves and eagerly awaiting your $3.99.